The following “Mad Cow Disease” story has hit the mainstream media over the past two days. Two headlines which appeared are as follows:

Answer: It doesn’t. Except with a lot of help from those who are in the position to suppress vital information and withhold sensitive data.

May we appeal to common sense for a moment? Given that the standard and ongoing practices utilized throughout agribusiness are more lax than ever, as well as less monitored than ever by the appropriate regulatory agencies, how could such a positive development occur concerning the Mad Cow Disease public health disaster? … … … except by being engineered to happen by those who have much to gain.

For those who are unaware of the facts about BSE (Bovine spongiform encephalopathy), here is something to think about:

“Bovine Spongiform Encephalopathy (BSE), commonly known as mad-cow disease, is a fatal neurodegenerative disease in cattle that causes a spongy degeneration in the brain and spinal cord. BSE has a long incubation period, about 30 months to 8 years, usually affecting adult cattle at a peak age onset of four to five years, all breeds being equally susceptible.” [1] 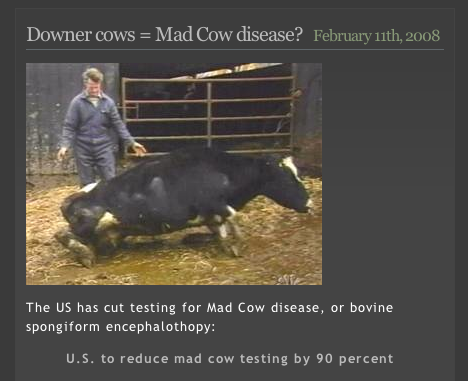 “The disease may be most easily transmitted to human beings by eating food contaminated with the brain, spinal cord or digestive tract of infected carcasses. However, it should also be noted that the infectious agent, although most highly concentrated in nervous tissue, can be found in virtually all tissues throughout the body, including blood. In humans, it is known as new variant Creutzfeldt–Jakob disease (vCJD or nvCJD), and by October 2009, it had killed 166 people in the United Kingdom, and 44 elsewhere. Between 460,000 and 482,000 BSE-infected animals had entered the human food chain before controls on high-risk offal were introduced in 1989” [2]

We have always believed that the US Government working in collusion with the Beef Industry have withheld critical information and data which would point directly to a much higher incidence of BSE in America. We also believe that many Americans die every year of Creutzfeldt–Jakob disease (vCJD or nvCJD), but are never accurately diagnosed and certainly never treated for it.

Do we have hard evidence to support this very strong belief. No we don’t, because the vested interests associated with this entire industry control the flow of information from the top down, as well as from the right to the left of the entire spectrum of stakeholders. There is very little opportunity to overcome the complete lockdown on all relevant information concerning both BSE in cows and vCJD or nvCJD in humans. Here’s why:

Certainly that $3 billion dollar plunge in revenue put a lot of people on notice about how all future BSE incidents and vCJD reports would be handled henceforth. The following excerpt from Wikipedia only confirms this notion, as well as our aforementioned suspicions:

Regulatory failures:
“In February 2001, the USGAO reported that the FDA, which is responsible for regulating feed, had not adequately enforced the various bans. Compliance with the regulations was shown to be extremely poor before the discovery of the Washington cow, but industry representatives report that compliance is now total. Even so, critics call the partial prohibitions insufficient. Indeed, U.S. meat producer Creekstone Farms alleges that the USDA is preventing BSE testing from being conducted.
The USDA has issued recalls of beef supplies that involved introduction of downer cows into the food supply. Hallmark/Westland Meat Packing Company was found to have used electric shocks to prod downer cows into the slaughtering system in 2007. Possibly due to pressure from large agribusiness, the United States has drastically cut back on the number of cows inspected for BSE.” [3]

After reading these statements, why would anyone place their confidence in the FDA or any other appropriate governmental body to follow through on its regulatory mandate. We’re talking about beef here, that ends up on meal tables across the country, and throughout the world. It’s clear you really can’t know for sure or trust the true quality of meat products these days, so low have the prevailing industry hygiene and safety standards sunk. 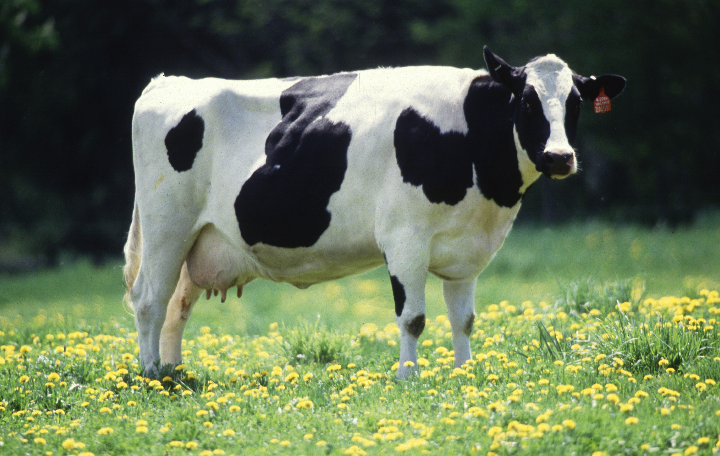 Therefore, it just may be a perfect time to become a vegetarian. You can bet you’ll make a bunch of cows, and calves, and bulls very happy with that decision.

By the way, there is no special oath when one does convert to the most basic type of vegetarianism. All that is required is a commitment to refrain from eating all flesh products, like beef from cows which may … or may not be … infected with BSE?!

Permission is granted to post this health blog as long as it is linked back to the following url: http://thehealthcoach1.com/?p=1452

1 thought on “Mad Cow Disease: A Great Time To Become A Vegetarian”