Enhancement of absorbed dose from natural background gamma radiation due to photoelectron induction in uranium particles.

The health effect of depleted uranium exposure is an area of scientific and political controversy. Despite a great deal of evidence that uranium particles from weapons show anomalous genotoxicity there has been no persuasive explanation of the biological mechanisms involved (ECRR2010). The issue had been considered by a committee set up by the Royal Society (RS) in 2000; the Chair of this committee was Prof. Brian Spratt. The outcome of its deliberations was published in 2001 (Royal Society 2001). It was concluded that it was impossible for the exposures to Depleted Uranium (DU) weapons to be the cause of any illness since the absorbed doses were too low. These conclusions were not accepted by all (e.g Busby 2000, 2003, Bertell 2006). The Ministry of Defence set up an independent board to oversee measurements of uranium in Gulf War veterans and to discuss the science: the Depleted Uranium Oversight Board (DUOB). Around the same time, evidence that internal radiation exposures (including DU) might be significantly more hazardous than current risk models predicted led the then Environment Minister, Michael Meacher, to set up the Committee Examining Radiation Risks from Internal Emitters, (CERRIE) chaired by Prof Dudley Goodhead. Goodhead had been the chief advisor to the RS on radiological issues of DU. Both the CERRIE and DUOB resulted in failures to agree among committee members and separate oppositional reports (www.duob.org; CERRIE 2004a , CERRIE 2004b).

So begins the explanation, and rebuttal, by Dr. Chris Busby (with some comments from Pattison et al – 2009 and the Royal Society), concerning the “enhancement of absorbed dose from natural background gamma radiation due to photoelectron induction in uranium particles”.  The rest of this paper can be read at the following link:

For those who understand the awesome implications of this work it is evident that all the depleted uranium scattered around the world has left us with an unprecedented and massive planetary challenge.   It also speaks to all the other background radiation and radioactive particles which find there way into the human body from whatever sources. Truly, this timely revelation represents a slow motion global health and medical crisis that is occurring 24/7 completely under the radar.

In the final analysis it will be recognized that the outworking of the Nuclear Energy Paradigm (NEP), and especially all of it various manifestations/applications throughout the nuclear power industry, military industrial complex, and medical field, is a primary causative factor for the dramatic uptick in all types of cancers over the last seven decades. In light of Dr. Busby’s work, the NEP will also be identified as a major co-factor for the exponential increase in the many alphabet soup diseases of this new millennium to include the proliferation of chronic degenerative disease, auto-immune dysregulation, multi-infection syndromes to name just a few exploding categories.

We suggest that everyone, who understands the nature and profundity of these findings, share them and provide your comment (personal testimony, unique contexts, etc.). However we can quickly multiply the vectors of dissemination of this critical and consequential information throughout the world community, we ought to. A literal and figurative sea change has taken place in the wake of the Japanese 9.0 earthquake and 15 meter tsunami. We must resist the temptation to settle back into the extraordinarily unenlightened status quo which existed around our limited understanding of the true and extremely deleterious effects of nuclear radiation which exists throughout the global living environment.

Just as the BP Gulf oil spill revealed the necessity to begin “transitioning the planet away from the Hydrocarbon Fuel Paradigm” so, too, the Fukushima nuclear disaster has exposed the dire need to start “moving the world away from the Nuclear Energy Paradigm”.

The photo below, rarely seen in the mainstream media, captures one of the explosions in Japan in the wake of the earthquake and tsunami.   What it vividly illustrates is how the atmosphere has become the major vector of dissemination of Hot Particles worldwide. 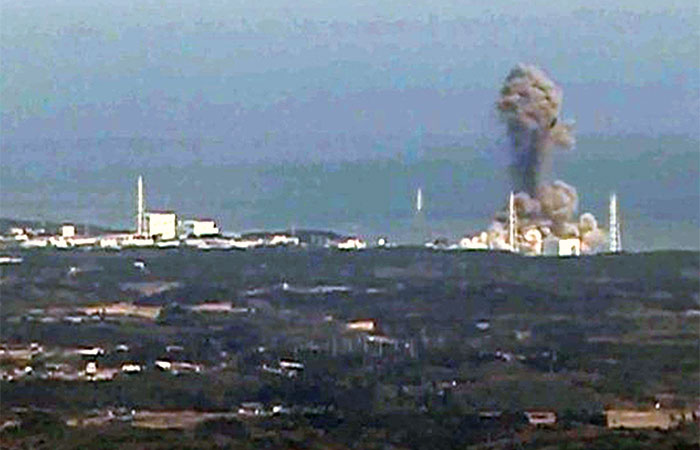 * This article has been reposted with full permission from the following website:
World Awash In Environmental Armageddon | Dedicated to Revealing the True State of the Global Environment