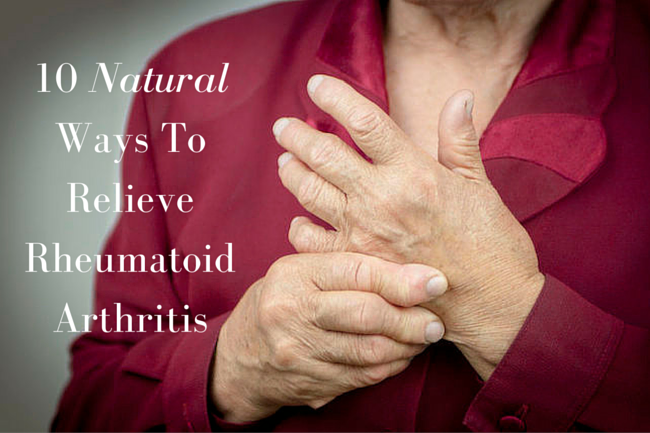 Rheumatoid arthritis (RA) is an autoimmune disease that affects more than 1.3 million American adults. It’s characterized by chronic inflammation and targets the bones, cartilage, and connective tissues of the joints.

Inflammation from RA results when the immune system mistakes joints for a hostile invader.  It attacks the joints causing cartilage, tissues, and bone to be destroyed.  The result is a crippling loss of mobility and function.

But RA can also attack outside the joints.  It’s estimated that about 15 to 25 percent of RA patients have this “extra-articular” form of rheumatoid arthritis.[i] This form of RA can manifest as pericarditis, pleuritis, inflammation of blood vessels, eye conditions, and kidney infections.  Eventually it can lead to death.

Standard medical treatment for RA includes painkillers and anti-inflammatory drugs to suppress symptoms.  Drug treatments target the inflammatory process by turning down the body’s inflammation reaction.  In some cases steroids, and even chemotherapy drugs like methotrexate are used. And even with drug therapy, a significant number of patients still have persistent, low-level disease activity.

Fortunately a wealth of natural therapies are safe and effective in the treatment of RA.  Here are just 10 of the proven ways to relieve rheumatoid arthritis.

Patients with rheumatoid arthritis have distinctive changes in their gut and oral microbiome.  OneChinese study took fecal, dental, and salivary samples from RA patients and healthy controls.  The researchers found specific differences in the microbiomes of the RA patients compared to the controls.  For example, RA patients’ levels of the bacteria Haemophilus spp were low whileLactobacillus salivarius was high. They also found that the microbiome of RA patients had an altered ability to metabolize iron, sulfur, zinc and arginine.

And a randomized, double-blind, placebo-controlled, parallel-design, clinical pilot trial showed that probiotics can help RA patients.  For six weeks, researchers gave 45 RA patients a lactic acid-producing bacteria (LAB) probiotic, or a placebo, in addition to their regular medications.  The probiotic used was Bacillus coagulans GBI-30, 6086, an LAB strain that can withstand the low pH of stomach acid.

Patients receiving the probiotic were able to walk two miles, reach, and participate in daily activities. Compared to the placebo, they had improved pain scores, less disability, and reduced C-reactive protein. C-reactive protein (CRP) is a protein that’s produced by the liver. CRP levels in the blood rise in response to inflammation and fall when inflammation wanes.

In a Korean study of 40 RA patients researchers provided patients with a mix of essential oils.  The blend consisted of lavender, marjoram, eucalyptus, rosemary, and peppermint in proportions of 2:1:2:1:1.  They were mixed with a carrier oil composed of almond (45 percent), apricot (45 percent), and jojoba (10 percent) oils diluted to 1.5 percent after blending.

The essential oil blend significantly decreased both the pain score and the depression score of the oils group compared with the control group.

Another randomized, double-blind study of 49 RA patients tested whether evening primrose oil (EPO) could replace NSAID drugs for pain and inflammation.  Patients received either a capsule containing EPO, or EPO plus fish oil, or a placebo. After 12 months the groups receiving evening primrose oil alone or with the fish oil had significant subjective improvement in their condition. They also significantly reduced their use of NSAIDs.

And a combination of lemon verbena and omega 3 fats was shown to reduce measures of joint dysfunction and pain by 53 percent and 78 percent.

A deficiency in vitamin D has been linked to rheumatoid arthritis.  In one Polish study of 97 RA patients, 76.3 percent were found to be deficient in vitamin D.  Researchers also linked vitamin D deficiency to higher RA disease activity and worse quality of life.

But supplementing with vitamin D can improve RA.  In a study from India, 73 RA patients with low vitamin D levels (below 20 ng/mL) were given 60,000 IU per week of vitamin D for six weeks followed by 60,000 IU per month for a total of three months.  On average serum vitamin D levels for the group improved from about 10 ng/mL to about 57. The researchers found that supplementing with vitamin D contributed to significant improvement in disease activity within a short period of time.

And vitamin D can lower the recurrence rate for RA.  In a study of 377 RA patients those with low levels were randomly assigned to receive vitamin D or not. After 24 months the vitamin D supplement group had a recurrence rate of only 19 percent compared to 29.5 percent for the group not taking vitamin D.

One theory suggests rheumatoid arthritis may be a reaction to food antigens and that the disease process starts within the intestine.  Diet studies seem to support this. Excluding meat, dairy products and cereals from the diet has been shown to improve RA symptoms.  The same is true for reducing dietary protein as part of an elimination diet or during fasting.

In fact, a two week elemental diet has been shown to be as effective as a course of prednisone for RA without the side effects. An elemental diet contains amino acids (no whole proteins), mono and di‐saccharides, and medium and long‐chain triglycerides, supplemented with vitamins and trace elements.

A study in the American Journal of Clinical Nutrition also found vegetarian diets to be beneficial. Researchers put 27 RA patients on a 7 to 10 day fast, followed by a 3.5 month gluten-free, vegan diet, and finally a nine month lacto-vegetarian diet. Compared to 26 controls, the dieting patients improved significantly even a year following the trial.  The researchers noted that changes in fecal flora were linked to improvements in the condition.

Researchers treated 100 RA patients with methotrexate, sulfasalazine, and meloxicam.  Half of the patients were also treated with bee sting venom at certain acupuncture points once every other day.  After three months, both groups significantly improved their scores for joint swelling, joint activity, pain, and pressing pain, grasp force, 15 minute-walking duration, and morning stiffness. But compared to the drugs-only group, the bee venom group had significantly better scores for joint swelling, pain and pressing pain, grasp force, and morning stiffness.  The bee venom group was also able to significantly cut their doses of methotrexate and meloxicam.  In addition, the relapse rate of the bee-venom group was only 12 percent compared to 32 percent for the drugs-only group.

German researchers in one pilot study found cod liver oil effective for the treatment of rheumatoid arthritis.   They gave 43 RA patients one gram of cod liver oil every day. After three months the patients had a 52.4 percent decrease in morning stiffness; 42.7 percent reduction in painful joints; 40 percent decrease in swollen joints; and a 67.5 percent reduction in pain intensity.  And 68 percent of the patients rated the efficacy of the cod liver oil as good or very good.

In a 12 week pilot study eight RA patients drank 10 ml (0.34 ounces) of pomegranate juice every day.  The pomegranate juice reduced the number of tender joints by 62 percent and overall disease activity by 17 percent.

Curcumin has been proven superior to a standard rheumatoid arthritis drug. In an Indian study 45 RA patients were divided into three groups.  One group took 500 mg of curcumin per day; a second took 50 mg of diclofenac (an NSAID); and a third took both.

The group taking only curcumin had the highest percentage improvement in scores measuring disease activity, and tenderness and swelling of joints. The scores were significantly better than the drug group.  The researchers also found that curcumin was safe and did not relate to any adverse events.

Researchers in Peking recruited 207 rheumatoid arthritis patients.  The subjects received 20 mg TGV pills three times a day, or methotrexate, or both. After 6 months, 55.1 percent of the TGV patients achieved 50 percent improvement in their condition compared to only 46.4 percent of the methotrexate group.  The combination group did even better with 76.8 percent of them improving by 50 percent.

Other therapies proven to reduce RA pain and stiffness include Tai Chi and yoga.

For more information about natural relief for rheumatoid arthritis, check out GreenMedInfo’s ebookArthritis – The Botanical Solution: Nature’s Answer to Rheumatoid Arthritis, Osteoarthritis, Gout and Other Forms of Arthritis