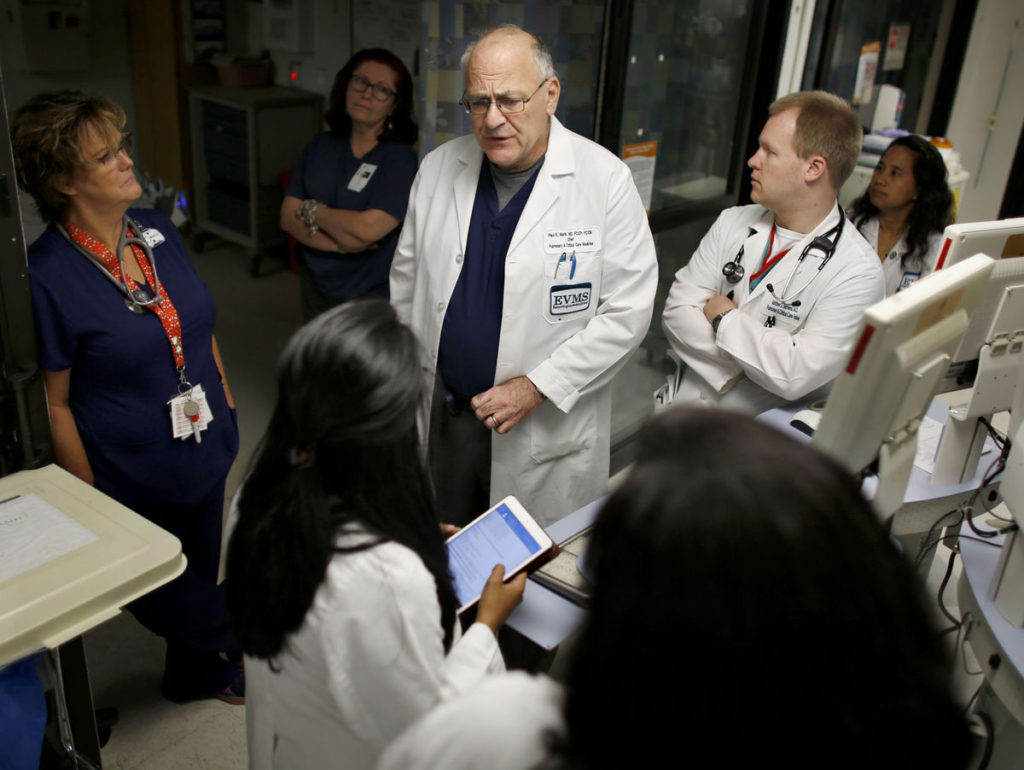 Dr. Paul Marik, center, makes rounds at an intensive care unit at Sentara Norfolk General Hospital with, among others, a group of Eastern Virginia Medical School students and residents in mid August. He and other critical care doctors have started using a combination of Vitamin C, hydrocortisone and thiamine to treat sepsis.

Valerie Hobbs is photographed in her home in Norfolk on Wednesday, March 22, 2017. In 2016, Hobbs developed sepsis, a blood infection, and Dr. Paul Marik at Sentara Norfolk General Hospital, tried a combo of drugs, Vitamin C and steroids, that improved her condition.

The patient was dying.

Valerie Hobbs, 53, was in the throes of sepsis – an infection coursing through her veins that was causing her blood pressure to tank, her organs to fail and her breathing to flag.

“When you have a person that young who’s going to die, you start thinking, ‘What else can we pull out of the bag?’ ” said Dr. Paul Marik, who was on duty that day in the intensive care unit of Sentara Norfolk General Hospital.

In this case, he reached for Vitamin C.

Marik, chief of pulmonary and critical care at Eastern Virginia Medical School, had recently read medical journal articles involving the vitamin, and decided to order IV infusions of it, along with hydrocortisone, a steroid, to reduce inflammation.

Then, he went home.

The next morning, Hobbs had improved so much she was removed from four different medications used to boost her blood pressure. Her kidney function was better. Her breathing eased.

That was in January 2016. Today, Hobbs is back at her home in Norfolk.

“At first we thought it was a coincidence, that maybe the stars aligned just right and she got lucky,” Marik said.

Ten days later, another patient, a paraplegic, arrived in the ICU with sepsis, and Marik prescribed the same thing. That patient improved as well.

A third patient, a man so sick with pneumonia he was on a ventilator, also received the treatment. The results were the same.

He suggested changing the protocol for patients who arrived with sepsis. He also added another ingredient to the concoction: thiamine, which is Vitamin B.

At first, doctors and nurses were skeptical.

Kathi Hudgins, a critical care nurse for 23 years, confesses she doubted Marik’s idea: “I thought it was too simplistic.”

Soon, she was sold.

“We started having patient after patient have these remarkable results,” she said. “They’d be at death’s door and 24 to 48 hours later, they had turned around. We have seen patients walk out of here we didn’t think would leave. To see them turn around so quickly was nothing short of amazing.”

They started tracking the numbers, comparing them with patients who came through the ICU with sepsis the previous year.

A study published online in December by CHEST, an American College of Chest Physicians medical journal, revealed the results:

Kurt Hofelich, Norfolk General’s president, said the protocol is being rolled out to other ICUs in the health system to validate the findings.

“We hypothesize that this new treatment will evolve into a national best practice and a new standard of care for patients with sepsis in an ICU level of care environment,” Hofelich said in a prepared statement released today.

First, it’s what is called a retrospective study, which means it compares something at one point in time to a control group further back in time.

Second, the numbers are small.

Third, the cases were all at one hospital.

Those are called study limitations. The gold standard study is a randomized, double-blind, placebo-controlled study in which patients with the same condition are observed in the same period, and health care providers don’t know who is receiving the treatment or a placebo.

Carlbom said multiple sites would ensure there was nothing particular to Norfolk that was making a difference.

He wants there to be a comprehensive study, and he said that Stanford University has expressed some interest. But he said it will be difficult to fund because it uses drugs that have been on the market for decades: “We are curing it for $60. No one will make any money off it.”

“By the time it’s done, it could be three years and the number of people who will die of sepsis by that time will be ginormous,” Marik said.

Hobbs, who didn’t realize at the time what was going on to treat her ruptured bile duct, now feels fortunate that Marik tried something out of the usual box: “It was good because it saved my life.”

Sepsis occurs in more than 1 million people a year in this country, with 28 to 50 percent dying, according to the National Institutes of Health.

The condition can stem from a variety of different ailments and has an overwhelming immune response to infection. Natural chemicals released in the body trigger widespread inflammation, which leads to blood clots and leaky vessels. That slows blood flow, damaging the organs by depriving them of nutrients and oxygen.

In the worst cases, blood pressure drops, the heart weakens and the patient goes into septic shock.

The cost to treat sepsis in the United States has been estimated at $20 billion a year in 2011.

Just as Marik pulled Vitamin C out of his bag to save the woman in January 2016, he pulls out these facts to sell his sepsis treatment to others.

He believes lives could be saved before a larger study is complete. He’s been traveling the country trying to find audiences of critical-care doctors to peddle the idea – Philadelphia, Charlottesville, Long Island, New York and, earlier this week, Seattle.

He’s gotten significant pushback from doctors who say it’s unethical to try before larger studies are done. But he responds that the use is within the limits of what the Vitamin C pharmaceutical label recommends.

“Half think it’s cool and half think this is hooey nonsense. When something is too good to be true, people don’t want to believe it.”

Carlbom said since sepsis results from a lot of different conditions, it could be that the combo could help some more than others, and might even be detrimental to particular ailments.

So he understands why doctors will wait for more study. But Carlbom, who describes himself as an early adopter, says he’s started to try it on his own patients.

Marik also took the step of having a researcher examine the idea in the lab. He reached out to John Catravas, who studies and teaches on the subject of bioelectrics at Old Dominion University.

Catravas has spent years researching lung function. Of special interest are the lung’s endothelial cells, which form the linings of the blood vessels: “When you have sepsis, the endothelial cells pull away from each other and allow fluid in the lungs.”

He looked at the effect of the Vitamin C, then the steroid, then the two in combination.

It wasn’t one or the other that was doing the trick, but both, almost as though one was holding the door open for the other to do its work in reducing inflammation.

It was a laboratory finding that supported what was happening in the clinical setting, which Marik included in the CHEST publication.

“We can’t both be completely insane,” Marik said.

Marik, who was born and educated in South Africa, is hardly a lightweight in the field. He has more than two decades of critical-care experience and has authored 400 medical journal articles and four books on critical care.

Still, the prospect of the lives this could save excites him at age 58.

Always one to use humor in the practice of medicine and life, Marik takes delight in the story of Ignaz Semmelweis. The Hungarian doctor in the 1840s figured out that doctors doing autopsies were also delivering babies, and unintentionally infecting patients, leading to high mortality rates. Midwives who weren’t doing autopsies had much lower rates.

He advised hand washing with a chlorine solution that acted as a disinfectant. When interns under his direction did that, their maternal mortality rates plunged.

But doctors were furious at Semmelweis, who ended up losing his job. The chlorine hand wash was abandoned.

Semmelweis ended up in a mental institution at age 47, and died there from, by some accounts, sepsis, which he’d worked so hard to try to prevent in women giving birth. His simple advice was picked up again when Louis Pasteur developed the germ theory of disease.

The irony is not lost on Marik:

“People who have studied sepsis a long time don’t want to believe a simple solution can work. Hopefully before I die it will be shown to be true.”