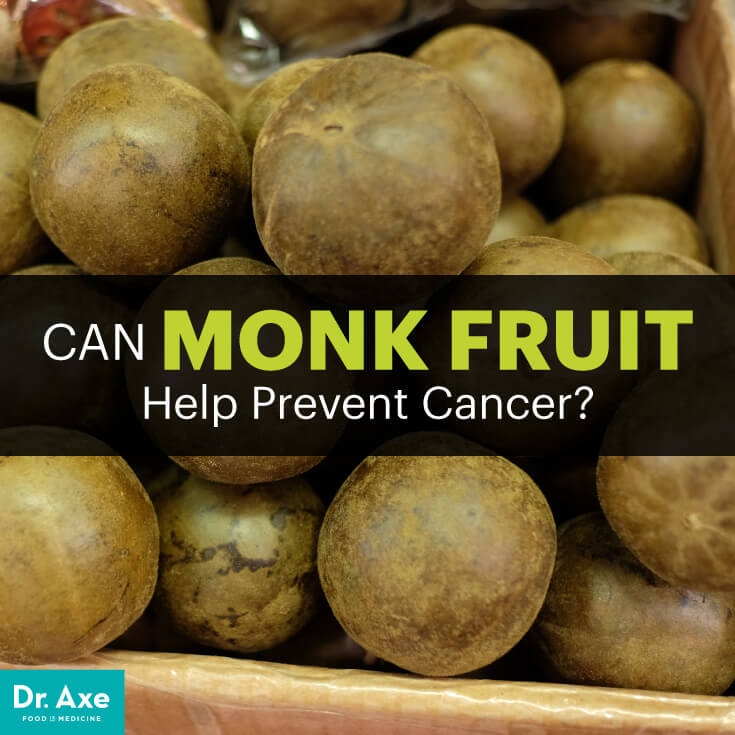 With sugar intake at an all-time high, finding healthier, sweet alternatives has been a priority for many people. Sugar substitutes and artificial sweeteners tend to be filled with other harmful chemicals and ingredients, and some still contain calories. Monk fruit sweetener has been celebrated as a revolutionary way to sweeten foods and drinks without the harmful effects of traditional sugar and sugar substitutes.

Monk fruit contains compounds that, when extracted, are natural sweeteners 300–400 times the sweetness of cane sugar but with no calories and no effect on blood sugar. Sound too good to be true? It’s not! This fruit has been used as a sweetener for centuries, and after many years being only available overseas, it’s recently become easier to find in grocery stores in the U.S.

Along with its magical sweetening powers, monk fruit has long been regarded as the “longevity fruit” thanks to its high antioxidant levels. Throughout history, it was also used medicinally as an expectorant, cough remedy and for help with other respiratory ailments.

It was also utilized for constipation, as a treatment for diabetes, and as a way to clear heat from the body caused by both internal and external sources. As monk fruit continues to be studied, more information about its health benefits are emerging.

Monk fruit, technically speaking, contain calories and carbohydrates like other fruits and vegetables, but because these remarkable fruits are not commonly consumed fresh (they begin to taste rotten quickly after harvesting), they typically are counted as a zero-calorie food. After drying, the trace amounts of fructose, glucose and other components are considered insignificant.

When eaten fresh, monk fruit does offer 25 percent to 38 percent various carbohydrates, as well as vitamin C. Because of its short shelf life after harvest, the only way to enjoy a fresh fruit is to visit the Asian regions where it’s been grown for hundreds of years!

But why is it so sweet?

Monk fruit is not sweet due to natural sugars like most fruits. It contains powerful antioxidants called mogrosides, which are metabolized differently by the body than natural sugars. That’s why, despite their very sweet taste, these fruits contain no calories and have no effect on blood sugar.

Monk fruit does contain mogroside I-V, with varying levels of sweetness — V being the highest and with the most additional health benefits. Some products produced with monk fruit may be intensely sweet but can be cut down and used in moderation. Many users of monk fruit sweeteners say the taste is pleasant, and there is little to no aftertaste like many other sugar substitutes.

Monk fruit’s mogrosides, the compounds that give it its intense sweetness, are also powerful antioxidants. Oxidative stress plays a part in many diseases and disorders, and choosing high-antioxidant foods is the key to reducing free radical damage in the body.

Studies have shown that mogrosides “significantly inhibited reactive oxygen species and DNA oxidative damage” (1, 2). The fact that the same monk fruit ingredients that provide antioxidants also provide a no-calorie sweetener makes it nothing less than a superfood.

2. Lowers Risk of Obesity and Diabetes

Sugar is incredibly damaging when consumed in the amounts that most Americans do today. It’s estimated Americans consume 130 pounds of sugar per year, as opposed to our ancestors in the early 1800s who averaged about 10 pounds. This surge in sugar intake has ballooned obesity rates, as well as cases of diabetes.

Although there are a number of artificial sweeteners available, the side effects of sugar substitutes like aspartame make them more harmful than the natural stuff. Monk fruit extract does not affect blood sugar the way natural sugars do — providing the sweet flavor we strongly crave without the damaging side effects.

Using monk fruit sweetener can help those already suffering from obesity and diabetes from furthering their condition because it works as a natural obesity treatment. (3) Another benefit is that the sweetener is extracted from non-GMO fruit, unlike table sugar and high fructose corn syrup.

3. Acts as an Anti-Inflammatory and Coolant

Ancient Chinese usage of this fruit included drinking tea made from the boiled fruit to cool the body from external and internal sources and ailments from fever to heat stroke. It was also used to soothe a sore throat. This method worked because of monk fruit’s anti-inflammatory abilities.

Inflammation can cause a host of issues throughout the body, and many modern anti-inflammatory medications come with harmful side effects, such as liver damage. Using monk fruit is a natural way to fight inflammation. Many studies prove its anti-inflammatory powers are most likely the reason it’s able to positively affect so many other diseases and disorders. (4, 5).

Scores of studies have proven the anti-carcinogenic effects of the natural sweeteners contained in monk fruit. From studies displaying its abilities in inhibiting skin and breast tumor growth to providing proteins that have potent anticancer abilities, monk fruit is a great warrior in the fight against cancer. There is irony in the fact that other sweeteners are proven to increase the risk of cancer, while monk fruit sweetener has the power to reduce it (6, 7, 8, 9). When treating bacterial infections, antibiotics are widely overused. Natural antimicrobial agents are a much better option to fight off infections to slow the ongoing surge of antibiotic resistance. Monk fruit has shown incredible results in inhibiting the growth of bacteria, specifically oral bacteria that cause tooth decay and periodontal disease (10, 11).

These studies have also shown the fruit’s ability to fight some forms of candida symptomsand overgrowth, like oral thrush, which when left untreated can affect many other body systems.

In a study on mice, monk fruit extracts were successful in decreasing fatigue in exercising mice. The study was able to reproduce the results and prove that mice given the extract had extended exercise times (12). This study may give evidence as to why monk fruit has long been referred to as the “longevity fruit.”

This fruit was used as an antidiabetic by the Chinese for centuries. Aside from being a proven antihyperglycemic (which helps bring down the blood glucose levels in the body), studies have also shown targeted antioxidant abilities toward pancreatic cells, allowing better insulin secretion in the body (13, 14). Thus, monk fruit works well as a natural diabetes treatment.

The antidiabetic abilities of the monk fruit are associated with its high levels of mogrosides. (15) Better insulin secretion is a major part of improving diabetic patients’ health, and monk fruit has even shown results in reducing kidney damage and other diabetes-related issues. (16) As a sweetener with a low glycemic index, it’s also a way for those struggling with diabetes to be able to enjoy a sweet flavor without the concern of affecting or worsening their diabetic condition. (17)

8. Works as a Natural Antihistamine

Monk fruit extract, when used repeatedly, has shown an ability to fight allergic reactions as well. In a study with mice, monk fruit was administered repeatedly to mice exhibiting nasal rubbing and scratching due to histamines. The study showed that “both the [lo han kuo] extract and glycoside inhibited the histamine release” in the test subjects. (18)

Monk fruit, also called luo han guo, is part of the cucurbitaceae (gourd) family and grows on a vine. It’s named after the monks that harvested this fruit in southern Chinese mountains as early as the 13th century. Rarely found in the wild, the fruits were originally harvested in the southern regions of China, mainly the Guangxi and Guangdong mountains, as well as a few other areas of southeast Asia. The mountainous region provided shade and mist for the fruit to grow successfully.

This region was also home to many Buddhist temples, which is why the fruit is also called the Buddha fruit, and the Lohan or Arhat fruit, which in Buddhism refers to someone who has achieved nirvana.

The fruit was originally brought to North America in the early 20th century by a group from the National Geographic Society, who later named the fruit’s scientific name (siraitia grosvenorii) after its president, Gilbert Hovey Grosvenor.

The Chinese government has a ban on monk fruit and its genetic material from leaving the country. Therefore the fruit must be grown and manufactured in China. This, combined with the complicated process of mogroside extraction, makes monk fruit products expensive to create.

How to Purchase and Use Monk Fruit Sweetener

There are a few ways you can get the benefits of monk fruit into your home. As stated before, because of its short shelf life, the only way to try it fresh would be to travel to Southeast Asia and buy one fresh off the vine! The next best way to get the rewards of this natural sweetener is by purchasing monk fruit extract or monk fruit sweetener. The sweetness is contained in the mogrosides, and depending on the manufacturer, the percentage of the compound varies.

Dried monk fruit can be found at many Chinese markets and is simply a dried version of the fruit. You can use the dried fruit in soups and teas. Drugs.com recommends, “One half to 2 pieces (approximately 9 to 15 g) of the dried fruit is commonly used as a tea after simmering in boiling water.”

You can also make your own monk fruit extract by following one of the Liquid Stevia Extract recipes here. You can choose to make it using alcohol, pure water or glycerin, or a combination of the three. Making your own solution at home ensures you know what ingredients are used and the quality of ingredients.

Monk fruit extract is manufactured in a number of different ways. Most commonly, the fresh fruit is harvested and the juice is combined with a hot water infusion, filtered and then dried to create a powdered extract.

Some monk fruit sweeteners are available “in the raw” and other similar products. Beware of added ingredients like molasses and a sugar alcohol called erythritol, which will decrease the health benefits of the product.

Potential Side Effects of Monk Fruit

There are no reported monk fruit side effects or negative reactions, which means it’s safe for adults, children and pregnant/nursing women. It was approved by the FDA in 2010 as generally safe for consumption, which is relatively recent. There are no long-term studies available to test monk fruit side effects over time, so it’s always best to exercise care when consuming.