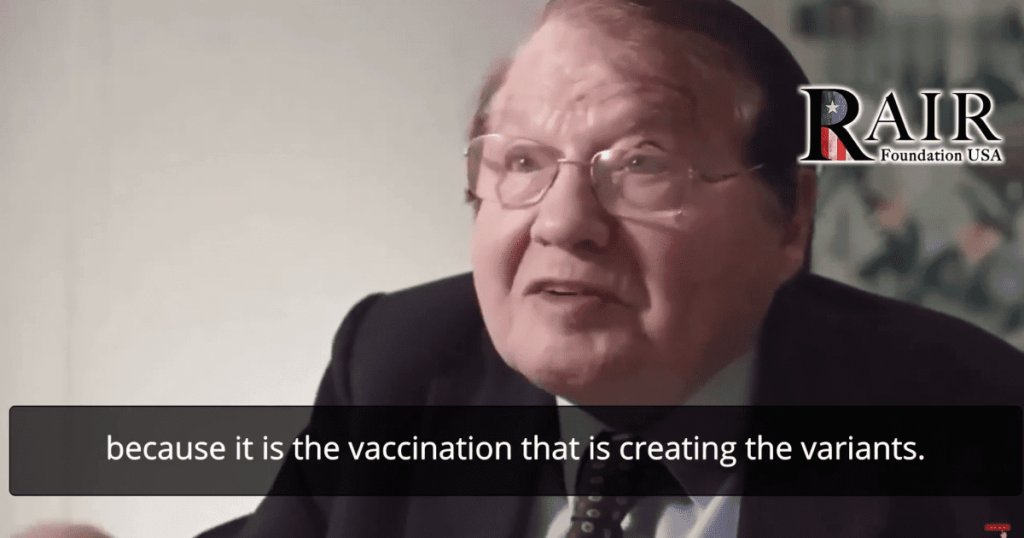 Prof. Luc Montagnier said that epidemiologists know but are “silent” about the phenomenon, known as “Antibody-Dependent Enhancement” (ADE).

While it is understood that viruses mutate, causing variants, French Virologist and Nobel Prize Winner Luc Montagnier contends that “it is the vaccination that is creating the variants.”

The 2008 Nobel Laureate made the explosive comments as part of a larger interview with Pierre Barnérias of Hold-Up Media earlier this month. The clip was exclusively translated for RAIR Foundation USA, and is quite damning for the agenda-driven left-wing establishment.

As reported at RAIR in April of last year, Prof. Montagnier presented a powerful case that the coronavirus was created in a lab. His comments at the time offended the left-wing establishment so much that they aggressively attempted to discredit his statement. Now, the media is backpedaling on the origin of the coronavirus after prominent scientists called for further scrutiny.

Vaccines are Creating the Variants

The prominent virologist explained that “there are antibodies, created by the vaccine,” forcing the virus to “find another solution” or die. This is where the variants are created. It is the variants that “are a production and result from the vaccination.”

Prof. Montagnier said that epidemiologists know but are “silent” about the phenomenon, known as “Antibody-Dependent Enhancement” (ADE). In the articles that mention ADE, the concerns expressed by Prof. Montagnier are dismissed. “Scientists say that ADE is pretty much a non-issue with COVID-19 vaccines,” an article at Medpage Today reported in March.

Prof. Montagnier explained that the trend is happening in “each country” where “the curve of vaccination is followed by the curve of deaths.”

The Nobel Laureate’s point is emphasized by information revealed in an open letter from a long list of medical doctors to the European Medicines Agency. The letter stated in part that “there have been numerous media reports from around the world of care homes being struck by COVID-19 within days of vaccination of residents.”

Earlier this month, RAIR reported on a statement by French Virologist Christine Rouzioux:

“…the rise in new cases is occurring in vaccinated patients in nursing homes in ‘Montpellier, in the Sarte, in Rheims, in the Moselle…”

Prof. Luc Montagnier continued to say that he is doing his own experiments with those who become infected with the coronavirus after getting the vaccine. “I will show you that they are creating the variants that are resistant to the vaccine,” he said.

Watch the clip (transcribed below):

Many thanks to HeHa and Miss Piggy for the translation!

If we look at the curve from the WHO, since the vaccinations started in January, the curve showing new infections (contamination) has exploded, along with deaths.

—It’s an enormous mistake, isn’t it? A scientific error as well as a medical error. It is an unacceptable mistake. The history books will show that, because it is the vaccination that is creating the variants.

—For the China virus, there are antibodies, created by the vaccine. What does the virus do? Does it die or find another solution?

—The new variants are a production and result from the vaccination. You see it in each country, it’s the same: the curve of vaccination is followed by the curve of deaths.

—I’m following this closely and I am doing experiments at the Institute with patients who became sick with Corona after being vaccinated. I will show you that they are creating the variants that are resistant to the vaccine.

Should we be vaccinating during a pandemic?

—They’re silent… many people know this, epidemiologists know it.

—It is the antibodies produced by the virus that enable an infection to become stronger.

—It’s what we call Antibody Dependent Enhancement, which means antibodies favor a certain infection. The antibody attaches to the virus, from that moment it has the receptors, the antibodies, we have them in the macrophage etc.

—It pokes the virus and not accidentally, but because of the fact that they’re linked to the antibodies.

—It is clear that the new variants are created by antibody-mediated selection due to the vaccination. OK?