Update 3: A peer reviewed paper from MIT published in Apr 2021,[20] confirmed their earlier pre-print version published Dec13, 2020,[21] that “Reverse-transcribed SARS-CoV-2 RNA can integrate into the genome of cultured human cells and can be expressed in patient-derived tissues”.  Their results are “consistent with a LINE1 retrotransposon mediated, target-primed reverse transcription and retroposition mechanism.”  Even though with infection of SARS-CoV-2virus, they detected only subgenomic sequences derived mainly from the 3′ end of the viral genome integrated into the DNA of the host cell,in the case of mRNA vaccines, given that we’re told the S protein gene is the only gene encoded by the mRNA, which by default is near the 3’ end, and was given a poly(A) tail and various other features to stabilize it, and given that tens of billions of copies of this mRNA are injected in one dose, it seems to me that there’s a good chance similar reverse transcription and retrotransposition of the S protein gene – the MOST PATHOGENIC gene of this entire virus – could really occur, as many scientists have warned from the beginning.  Once integrated into the genome, the host could express the S protein in the long term, which would trigger persistent autoimmune response, causing attack on the cells it has integrated into.

“Proteins that mediate fusion between viral and cellular membranes can in some cases also do so between cells that express the viral fusion protein and those that express the viral receptor. For instance, cells expressing the HIV-1 envelope glycoprotein gp160 can form multinucleated syncytia with cells expressing the HIV-1 receptors CD4 and CCR5”. The 2003 Nature paper went on to demonstrate that “293T cells transfected with ACE2, but not those transfected with human immunodeficiency virus-1 receptors, formed multinucleated syncytia with cells expressing S protein (of SARS-CoV-1)”.[19]

UPDATE: I’ve expanded the second half of the article to include many more mechanisms that I’m aware of but didn’t include in the original version. 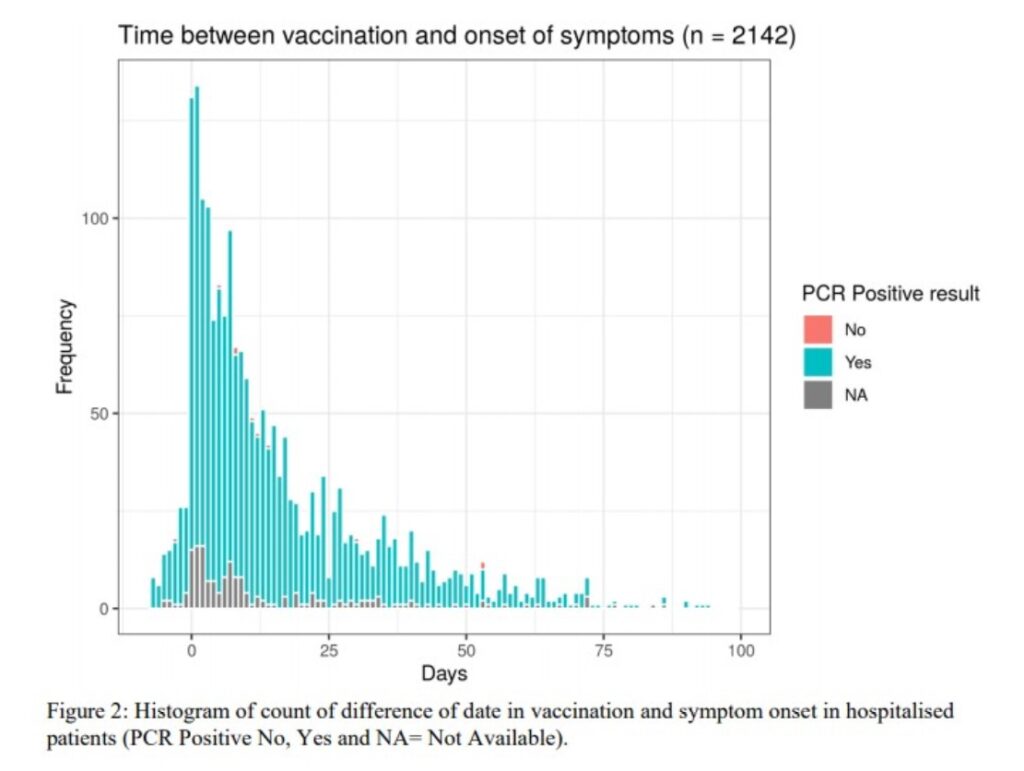 A study on UK government’s website, dated Apr 2021, conducted by the ISARIC4C consortium, found that among the hospitalized COVID patients who had ALREADY BEEN VACCINATED, the onset of symptoms is most commonly from the day of vaccination to 3 days after that.  The onset is 5x as frequent ON the day of the vaccination as the day BEFORE vaccination! [1]

The preferred mainstream explanation is blaming behavioural change – they assume that those who had been vaccinated shielded & isolated less.  Yet they have no evidence to back that up.  Crucially, “No one is suggesting there was a change of behaviour within care homes, except for inviting people in to carry out the vaccinations. However, care homes in every corner of the country saw outbreaks from December”, wrote a rebuttal published in the British Medical Journal.[2]

The other idea offered by some mainstream academics is that going to the vaccination centers itself may be a “super-spreader event” – but again, care homes didn’t fit that bill.

Also, even if these people did contract the virus on the vaccination day, why would more of them have symptom onset on that day and the 3 days immediately after, rather than the usual incubation period of 5 days?

He cited evidence that while “the coronavirus replicates almost exclusively in the septal capillary endothelial cells of the lungs and the nasopharynx”, “viral lysis and immune destruction of those cells releases viral capsid proteins (or pseudovirions) that travel through the circulation and bind to ACE2 receptors in these other parts of the body…… that not only damages the microvascular endothelium but also induces the production of many pro-inflammatory cytokines”.  He cited evidence that the brain tissues of those that died from COVID were found to have pseudovirions (spike, envelope, and membrane proteins) without viral RNA, in the endothelia of cerebral microvessels, and that injecting just the S1 spike subunit in mice led to neurologic signs.[5]

It’s relevant with regard to what Dr. Noorchashm is warning about, to note that Pfizer’s clinical trial protocol (on page 41) explicitly excluded anyone who has had COVID-19 from enrolment.[7]

He warned that a large part of the injected mRNA or DNA-containing nanoparticle packets encoding the spike protein will reach local lymph nodes, and through there, into blood circulation.  In the lymph nodes, when they’re taken up by lymphocytes which then express the spike protein, those cells will be targeted for destruction by other lymphocytes, (likely accounting for the white blood cell depletion mentioned in #1 above).  The lymphocytes thus activated will multiply and swarm out of the lymph nodes to seek out more S protein antigen.  They’ll attack any muscle cells where the S protein is presented (muscle swelling, pain).[12]

The nanoparticles that get into the bloodstream will be trapped there.  Some will fuse with blood cells, but most will be taken up by endothelial cell lining the smallest of veins where blood flows really slow.  The expression and presentation of the S protein by these microvascular endothelial cells attracts and activates platelets, which induces clotting.  These cells also produce trash during spike protein production, which he says will be placed outside the cell, and attractskiller lymphocytes to attack the presenting endothelial cells, damaging the vascular lining, causing inflammation, and clotting.[12]

So indeed, the spike protein that the vaccines contain or encode for, is alone sufficient to cause COVID symptoms (and deaths in severe cases), and have numerous medium to long term potential serious consequences.  Only criminal governments would have rushed it ahead and imposed it on the world with utter deceit.

Maggie Zhou received her PhD from the University of Wisconsin – Madison in 1997, and worked as a computational biologist for a number of years.  She is currently an independent seeker of truth.