Flavia Groșan chose not to apply official protocols to treat COVID-19 patients at all stages of the illness, instead approaching the disease as an ‘atypical pneumonia.’ 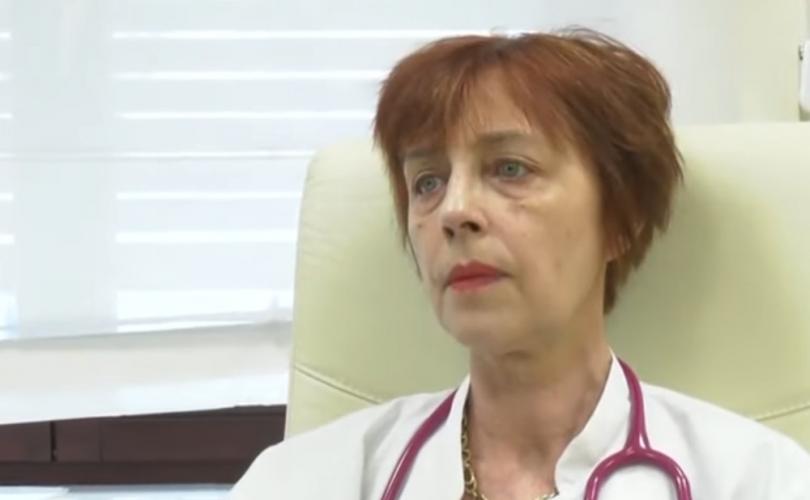 March 24, 2021 (LifeSiteNews) — A pneumologist has been cleared of suspicion of “malpractice” by the Bihor Medical College in Romania after having been summoned on Monday to present her personal method for treating COVID-19 patients, which she claims has already allowed her to cure up to 1,000 patients.

Flavia Groșan, from Oradea near the Hungarian border, has been vocal in the Romanian media regarding her choice not to apply official protocols to treat COVID-19 patients at all stages of the illness, instead approaching the disease as an “atypical pneumonia.” She even went so far as to say that huge mistakes are being made in hospitals with excessive oxygen-therapy and, in the worst cases, intubation, which she claims actually “kills” the sick. Too much oxygen for too lengthy periods at a time, says Groșan, can lead to cerebral edema which in turn can cause death. Intubation is even more dangerous, according to the broncho-pneumologist.

Her option, based on her twenty-year long experience, is to administer less oxygen so as not to go beyond a patient’s needs, and she also gives antibiotics and a few other cheap medicines, contrary to recommendations in many countries. This option, she says, has allowed her to heal “100 percent” of some 1,000 patients who went through her hands, with only a tiny handful perhaps going on to hospital later without her knowledge.

“My goal from the beginning of the pandemic was that no patient should get on the oxygen mask, nor be intubated. And it didn’t happen,” she told the widely-read daily National. “I use my classic, cheap medication, which also includes Clarithromycin, an antibiotic that is part of the macrolide antibiotic group. It is the only antibiotic with viral tropism (the property to be located in certain organs).”

Her sensational pronouncements have led some patients low on oxygen as a result of a COVID-19 infection to refuse treatment in hospital. Which is possibly one of the reasons she was asked to appear before a medical board, on Monday, that had the power to sanction her.

But even this did not result in an official condemnation of her treatment; instead, the Bihor Medical College told the media on Monday that the hearing of Dr. Flavia Groșan was not an “investigation” but merely a “discussion” about her statements.

Carmen Pantiș, the Medical College’s president, stated after the meeting that Groșan had expressed “love” for her patients, and clarified that there were “no elements of distrust” on her part with regard to medical activity within the hospital.

The Ethics Commission decided not to sanction her, according to the official statement, because the treatment applied by Groșan “has its role and its place.” Pantiș added that the “huge wave of sympathy” that has surrounded the independent-minded doctor played a part in what happened on Monday morning: it “confirms that the doctor’s treatments are good.”

Flavia Groșan had come to the hearing accompanied by a lawyer and was met by a crowd of cheering supporters of all ages, and large numbers of journalists. She was given flowers and applauded; the press commented that she had been “vindicated” by the Ethics Commission of the hospital to which she had presented her treatment.

Groșan, who is currently employed at a private hospital, went on record saying that she found the official, obligatory COVID-19 protocol “extremely difficult” — it involves waiting until patients infected with SARS-CoV-2 display dangerous symptoms such as breathlessness and low oxygen, giving them only paracetamol in the meantime.

Groșan explained that she called on her personal experience with many patients over the previous years: “I found a cheap option with drugs from the nomenclature of the Ministry of Health. It’s a cheap and an incredibly beautiful combination. I have 20 years of experience in pneumology,” she said.

This traditional approach, by which doctors use analogous reasoning and trust in their own knowledge of medicines and individual reactions to treatment, has allowed her to heal all of the nearly 1,000 patients to whom she gave her “beautiful” treatment, whatever the stage of the illness they were in, she claimed.

Rather than giving massive doses of oxygen when a patient’s saturation level reaches dangerously low levels, Groșan avoids “overdoses” such as those that are used by hospitals and that can lead to edema in the brain.

“When their saturation is above 80 percent, I only give my patients very small doses of oxygen, of the order of 2-3 liters per minute, in the form of short daily administrations, of 4 to 5 hours at most. It is important to know that too much oxygen inhibits the brain, because in general it is the brain that controls our body, not a machine. On this point, I disagree completely with the current COVID protocol: the high doses of oxygen it prescribes, of the order of 20 liters, lead to acidosis, causing cerebral edema in patients … which, in turn, leads of course to their death,” she explained.

She also warned against the administration of Kaletra (an anti-HIV medication, lopinavir) and codeine that are apparently being prescribed to COVID-19 patients in Romania. They can only make the symptoms worse, she said.

“Fortunately, there were a few nurses — the ones I consider to be real heroines — who observed the patients, and warned them not to swallow the Kaletra and to throw away the medication. Afterwards, the doctors who came to check on them were amazed that they had no diarrhea, and that they felt fine. The reason for this was that they had not taken the medication prescribed by the protocol. This is how these caregivers truly saved their patients’ lives.’”

“When codeine is used, because coughing is blocked, the patient cannot cough up the secretions that form in the lungs, and it is these secretions that are choking them — not the blood clots, but the buildup of secretions,” she explained. “At this point, the patients predictably go into a state of panic because they can no longer breathe, so they are given painkillers and put on a ventilator — from that point on, there is only divine mercy to save them!”

Flavia Groșan has become a very popular figure in Romania, and even though journalists tend to use a hostile tone towards her, Groșan’s message is being heard.

In a recent interview, she explained that she had healed five members of one family, aged 37 to 97, allowing them all to celebrate Christmas together, fully recovered.

In an interview translated by the Visegrad Post, she deplored that those who fall ill become very afraid and want to go to the hospital, “even though you can stay at home and heal by taking medication.”

She herself offers online consultations, and when she suspects the “atypical pneumonia” linked with COVID-19 is present, she immediately prescribes clarithromycine, even if the patient has little or no temperature. She has continued to use her non-recommended protocol despite having been reported to the authorities by a colleague for not following the rules.

Groșan is almost unanimously rejected by fellow pneumologists, but she has managed to convince the medical hierarchy of Romania that her claims should not be rejected out of hand.

Carmen Pantiș of the Bihor Medical College has made clear that Groșan may continue to go on working as she always has: “The doctor will continue to treat her patients exactly as she has done so far. All serious cases will be referred to the hospital where there are more complex tests and a supportive treatment,” she stated.

But if Groșan’s claims are correct, there is no need for that when following her therapeutic recommendations.