This page is updated daily as new information emerges. It sets out the current Case Fatality Rate (CFR) estimates, the country-specific issues affecting the CFR, and provides a current best estimate of the CFR, and more importantly, the Infection Fatality Rate (IFR).

The proportion of deaths to the total numbers of cases was meta-analysed using the R function metaprop, using fixed-effect inverse-variance weighting. Estimates from the cruise ship ‘Diamond Princess’ as well as countries with three or fewer deaths to date recorded were excluded from the analysis. Country-level case fatality is presented as a percentage along with 95% confidence intervals in a forest plot. Estimates of heterogeneity and a 95% prediction interval are presented, but a pooled overall estimate is suppressed due to heterogeneity. (understanding data in meta-analysis) 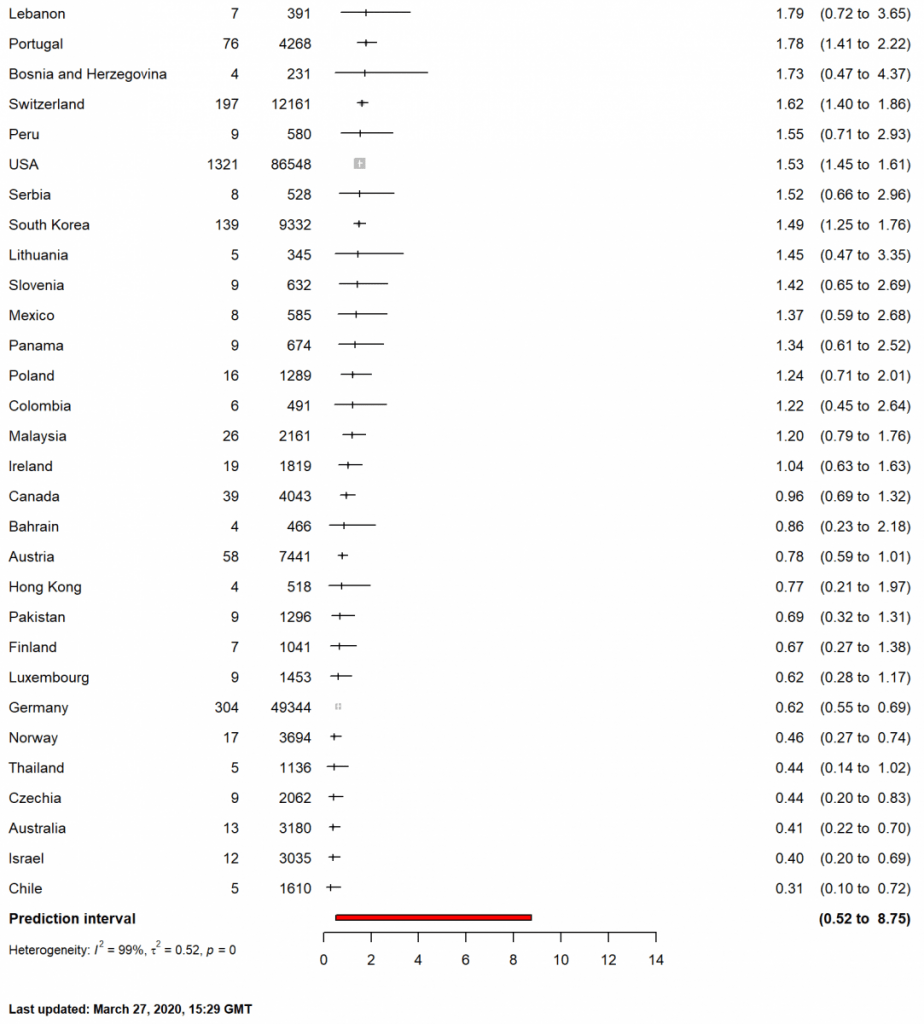 What is affecting the case fatality rate?

In China, CFR was higher in the early stages of the outbreak (17% for cases from 1 to 10 January) and reduced to 0.7% for patients with symptom onset after 1 February.

Summary of a Report of 72 314 Cases From the Chinese Center for Disease Control and Prevention. The data is also reported in the Epidemiological Characteristics of an Outbreak of 2019 Novel Coronavirus Diseases (COVID-19) — China, 2020 (China CDC weekly).

Reported CFRs by age were

Patients with comorbid conditions had much higher CFR rates:

*Critical cases had a CFR of 49.0%, no deaths occurred among those with mild or even severe symptoms.

Limitation: some variables of interest (i.e., comorbid condition, and case severity) are not required fields in the Chinese CDC Infectious Disease Information System, and some records have missing data.

Why is cardiovascular disease (CVD) so prevalent in those who died with COVID-19?

Most acute viral infections have three short-term effects on the CVD system:

Seasonal influenza infections have been shown to contribute to an increase in CVD deaths significantly. Community-level rises in Influenza-like illness (ILI) were associated with and predictive of CVD mortality: deaths from ischaemic heart disease rose from 2.3% to 6.3% when emergency department visits with ILI rose from the 25th to the 75th centile.

Nature Medicine: Estimating the clinical severity of COVID-19 from the transmission dynamics in Wuhan, China~:

Because Wuhan prioritized the admission of more severe cases, the sCFR will be substantially lower than the HFR*

In Italy, there are several reasons why the. CFR might be higher. The age structure of the Italian population (2nd oldest in the world); highest rates of antibiotic resistance deaths in Europe (Italy tops the EU for antibiotic-resistance deaths, with nearly 1/3rd of the deaths in the EU). Smoking also seems to be a factor associated with poor survival – in Italy, 24% smoke, 28% men. In the UK, for instance, 15% are current smokers.

UPDATE 20 March: Coronavirus: Is Covid-19 the cause of all the fatalities in Italy?

Sarah Newy reports Italy’s death rate might be higher because of how fatalities are recorded. In Italy, all those who die in hospitals with Coronavirus will be included in the death numbers. In this article, Professor Walter Ricciardi, Scientific Adviser to, Italy’s Minister of Health, reports, “On re-evaluation by the National Institute of Health, only 12 per cent of death certificates have shown a direct causality from coronavirus, while 88% patients who have died have at least one pre-morbidity – many had two or three.”

Recording the numbers of those who die with Coronavirus will inflate the CFR as opposed to those that died from Coronavirus, which will reduce the CFR.

17th March 2020: Report from the Italian National Institute of Health: analysed 355 fatalities and found only three patients (0.8%) had no prior medical conditions. See Table 1 in the paper; (99% who died had one pre-existing health condition):

The most common problems in the 355 who died were:

Iceland is presenting many interesting pointers for estimating the CFR. Iceland has tested a higher proportion of people than any other country (9,768 individuals), equivalent to 26,762 per million inhabitants the highest in the world (as a comparison, South Korea has teated 6,343 individuals).

The results of screenings have suggested 0.5% are infected; the true figure is likely higher due to asymptomatic and as a result of many not seeking testing: estimates suggest the real number infected is 1%. Iceland is currently reporting two deaths in 737 patients, CFR. 0.27%; if 1% of the population (364,000) is infected, then the corresponding IFR would be 0.05%. However, they have limited infections in the elderly as their test and quarantine measures have seemingly shielded this group, and the deaths will lag by about two weeks after the infection. Iceland’s higher rates of testing, the smaller population, and their ability to ascertain all those with Sars-CoV-2 means they will likely provide an accurate estimate of the CFR and the IFR. Current data from Iceland suggests the IFR is somewhere between 0.05% and 0.14%.
United Kingdom:
Assessment: Impact assessment of non-pharmaceutical interventions (NPIs) to reduce COVID-19 mortality and healthcare demand

Neil Ferguson’s team at Imperial College, London, modelled the impact of COVID-19, interventions to reduce the spread and their effects on case fatality.

See the summary of their assumptions: Impact assessment of non-pharmaceutical interventions (NPIs) to reduce COVID-19 mortality and healthcare demand pdf

Their Infection Fatality Rate estimates were based on from Verity et al. and adjusted to account for a non-uniform attack rate giving an overall IFR of 0.9% (95% credible interval 0.4%-1.4%).

Published in MedRxiv (preprint and not been peer-reviewed) Verity obtained age-stratified CFR estimates from cumulative death data in China, and from individual data on 1,334 cases identified outside of mainland China. Verity et al.estimated an overall IFR for China of 0.66% (0.39%,1.33%), that increased with age.

The overall case fatality rate as of 16 July 2009 (10 weeks after the first international alert) with pandemic H1N1 influenza varied from 0.1% to 5.1% depending on the country. The WHO reported in 2019 that swine flu ended up with a fatality rate of 0.02%. Evaluating CFR during a pandemic is a hazardous exercise, and high-end estimates end be treated with caution as the H1N1 pandemic highlights that original estimates were out by a factor greater than 10.

Highest peak rate ratios for admissions are in those years where the confirmed simultaneous circulation of Influenza-Like Illness (ILI) and acute bronchitis occur. Between 1990–91 to 2004–05 respiratory admissions of ≥65 years in England and Wales were analysed. The ILI peaked was highly variable: the earliest during mid-November (week 46, 1993–94) and the latest, late February/early March (week 7, 1997–98).

On the Diamond Princess, six deaths occurred out of 705 who tested positive constituting a CFR of 0.85%. All six deaths six occurred in patients > 70. No one under 70 died.

Estimating the infection and CFR for COVID-19 using age-adjusted data from the outbreak on the Diamond Princess cruise ship using the age structure of the onboard population and modelled that on naive CFR estimates using China data. They report:

The current COVID outbreak seems to be following previous pandemics in that initial CFRs start high and then trend downwards. For example, In Wuhan, for instance, the CFR has gone down from 17% in the initial phase to near 1% in the late stage. It is increasingly clear that current testing strategies are not capturing everybody. In South Korea, considerable numbers who tested positive were also asymptomatics. Asymptomatic people and mild cases are likely driving the rapid worldwide spread.

We could also estimate the IFR as 0.26, based on halving the lowest boundary of the CFR prediction interval. There is still considerable uncertainty over how many people actually have the disease. (Update on this issue due tomorrow 28th March).

Our assumptions, however, do not account for some exceptional cases. As in Italy, where the population is older, smoking rates, comorbidities higher, and antibiotic resistance are higher, which all can act to increase the CFR and the IFR. It is also currently not clear what the excess mortality is in this group.

It is essential to understand whether the elderly are dying with or from the disease (see the Sarah Newy report). It is also not clear if the presence of other circulating influenza illnesses acts to increase the CFR (testing for co-pathogens is not occurring), and whether certain populations (e.g., those with heart conditions) are more at risk. Understanding this issue is now critical. If, for instance, 80% of those over 80 died with the disease (20% from it) then the CFR in >80s would be near 3% as opposed to 15%. This would then lower the overall CFR (and IFR) substantially.

What matters is now is how many people get infected in a short space of time: to what extent this overwhelms healthcare services and whether they can manage. The impact of measures to reduce spread are crucial in the upward phase of a pandemic that can affect a significant number of people at any one time.

*Estimating CFR and IFR in the early stage of outbreaks is subject to considerable uncertainties, the estimates are likely to change as more data emerges. The current prediction interval based on the available has a wide-ranging estimate of the CFR from 0.60 to 7.19. the corresponding IFR estimate based on this data would be 0.30 to 3.60.

See Lancet report: CFRs on mortality rate estimates can be misleading if the CFR is based on the number of deaths per number of confirmed cases at the same time. Using the denominator of the mortality rate as the total number of patients infected at the same time as those who died would lead to much higher CFRs. However, they report the full denominator remains unknown as asymptomatic with mild symptoms might not be tested and will not be identified, particularly in the early stages of an outbreak.

Thanks to David Bernstein (George Mason University) for posing the question of how we arrived at the CFR estimates.

We welcome more critiques/questions on this article, and we are keeping the CFR under daily review.

Disclaimer: the article has not been peer-reviewed; it should not replace individual clinical judgement and the sources cited should be checked. The views expressed in this commentary represent the views of the authors and not necessarily those of the host institution, the NHS, the NIHR, or the Department of Health and Social Care. The views are not a substitute for professional medical advice.

Estimating Case fatality rates in the early stage of outbreaks is subject to considerable uncertainties, the estimates are likely to change as more data emerges.