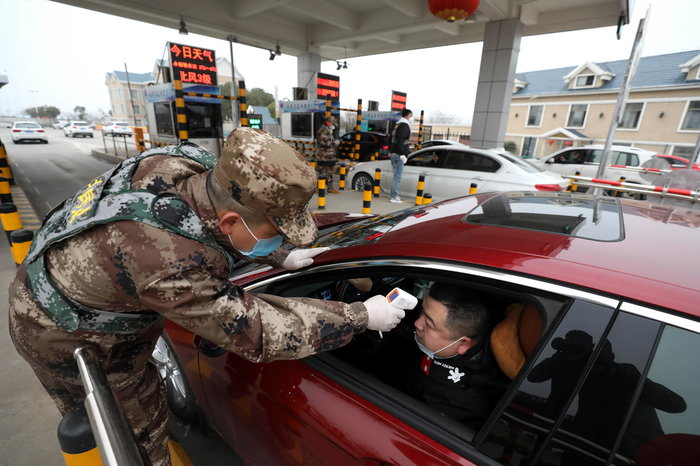 A militia member checks the body temperature of a driver at an expressway toll gate in Wuhan, China.
Barcroft Media via Getty Images

A new strain of virus that appears to have originated in China is spreading rapidly and crossing borders. There are hundreds of confirmed cases and at least 25 reported deaths. Here’s what we know so far about this virus, as reported by NPR’s daily science podcast Short Wave.

What kind of disease is this?

The outbreak is caused by a coronavirus. Common human coronaviruses cause mild to moderate upper respiratory symptoms, including the common cold, while more severe types can cause pneumonia and death. The name for this kind of virus comes from the crownlike spikes it has on its surface — “corona” is Latin for “crown.”

This strain of the virus is called 2019-nCoV for now, which is short for “2019 novel coronavirus.” It’s only the third strain of coronavirus known to frequently cause severe symptoms in humans. The other two are MERS and SARS.

Where did it come from?

Coronaviruses originate in animals — like camels, civets and bats — and are usually not transmissible to humans. But occasionally a coronavirus mutates and can pass from animals to humans and then from human to human, as was the case with the SARS epidemic in the early 2000s. (SARS stands for “severe acute respiratory syndrome.”) China’s National Health Commission has confirmed that 15 health care workers have become infected, indicating that the virus can spread from human to human.

The first known cases in December 2019 were traced to an animal market in the Chinese city of Wuhan and are believed to have come from contact with live animals that were infected. The market has since been closed. Wuhan is a major logistics and transportation hub. It lies about 500 miles west of Shanghai and is home to more than 11 million people. 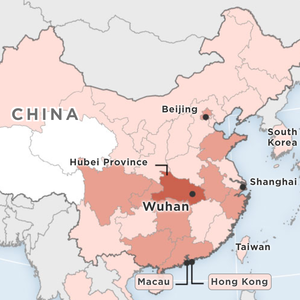 What are the symptoms?

The virus causes fever as well as respiratory symptoms: dry cough, difficulty breathing. It can also cause diarrhea and body aches. Symptoms in severe cases include pneumonia, kidney failure and even death, according to the World Health Organization.

Should someone with a fever be screened for Wuhan coronavirus?

The symptoms of this infection might appear the same as those for a cold or flu, but at this time the Centers for Disease Control and Prevention’s guidelines for health care providers suggest screening only people who have recently traveled to Wuhan or who have had close prolonged contact with a 2019-nCoV-infected person. The CDC can confirm the virus with a diagnostic test that it developed based on the genetic sequence of the virus that Chinese health officials obtained and made publicly available on Jan. 12.

Who is at risk of becoming infected?

The World Health Organization’s Emergency Committee on the coronavirus said in a Jan. 22 news conference that nearly three-quarters of cases have been in people over age 40 and that “cases who died — many had significant underlying conditions” like cardiovascular disease and diabetes. But there are confirmed cases in otherwise healthy, young individuals.

What treatments are recommended for this virus?

There are no virus-specific treatments for 2019-nCoV. The CDC suggests supportive care to manage and relieve symptoms. There is no approved vaccine available for this virus.

What are the affected countries and regions?

Within mainland China, more than 800 confirmed cases have been reported. The first U.S. case was reported on Tuesday: A Seattle-area man traveled to China and began experiencing symptoms a few days after he returned home to Washington state on Jan. 15. Public health officials are now referring to the man as “healthy.”

How does it spread?

Health officials believe the virus can be passed from person to person via exchange of fluids from the respiratory tract, but they still don’t know precisely how. The respiratory route seems likely because clusters of cases have been observed within families, whose members have had prolonged close contact with an infected person. There is emerging evidence in Wuhan that the virus can spread from one person to another to another multiple times — the way that a disease like the flu spreads. That’s something that global health officials are watching for in international cases.

How serious is this?

This virus is “highly infectious,” according to China’s Bureau of Disease Prevention and Control. But the agency does not consider the disease to be as virulent as the one that caused the SARS outbreak in 2003. The risk to the general American public is “low,” according to the CDC: Most cases have been found in China, and so far international spread seems limited.

What is being done to contain the spread of the outbreak?

Government officials have temporarily shut down transportation to and from Wuhan by bus, subway, ferry, airplane and train, according to Chinese state media. The travel ban comes just days before the biggest holiday on the Chinese calendar: Lunar New Year. Hundreds of millions of people travel every year during this holiday season, which begins Jan. 25 and extends into February.

Airports around the world, including five in the U.S., have implemented screening procedures for passengers arriving from affected areas.

The CDC is recommending that travelers avoid all nonessential travel to Wuhan. The agency encourages individuals traveling to areas of China outside of Wuhan to “practice usual precautions” at this time, which is its lowest level of caution.

Where can I get the latest information?

NPR will continue to report on the outbreak. The CDC is maintaining a traveler’s health notice. The World Health Organization has a website for outbreak news. The China Center for Disease Control and Prevention has an epidemic tracker.