The following description of Sudden Infant Death Syndrome (SIDS) appears on the PubMedHealth page at the US National Library of Medicine for crib death.

“Sudden infant death syndrome (SIDS) is the unexpected, sudden death of a child under age 1 in which an autopsy does not show an explainable cause of death.”

A newborn baby or young infant dies, and medical science cannot produce a conclusive explanation. Perhaps this is where common sense and reason can be applied in order to demystify SIDS with complete certainty. Truly, the causes are as obvious as night and day.

What is quite interesting is that the same PubMed web page offers the following anecdotal evidence under the heading “Causes, incidence, and risk factors”

“SIDS rates have dropped dramatically since 1992, when parents were first told to put babies to sleep on their backs or sides to reduce the likelihood of SIDS. Unfortunately, SIDS remains a significant cause of death in infants under one year old. Thousands of babies die of SIDS in the United States each year. SIDS is most likely to occur between 2 and 4 months of age. SIDS affects boys more often than girls. Most SIDS deaths occur in the winter.”

Because of the many mixed messages from the medical establishment concerning SIDS, many parents are often left in the dark when an infant dies and the cause of death is identified as SIDS. This label is not a very effective way of helping the parent(s) bring closure to what is always a very traumatic event in their lives.

What we hope to do with this session is bring clarity and focus, so that parent or parents-to-be are fully apprised of the realities in the life of a newborn or very young infant. 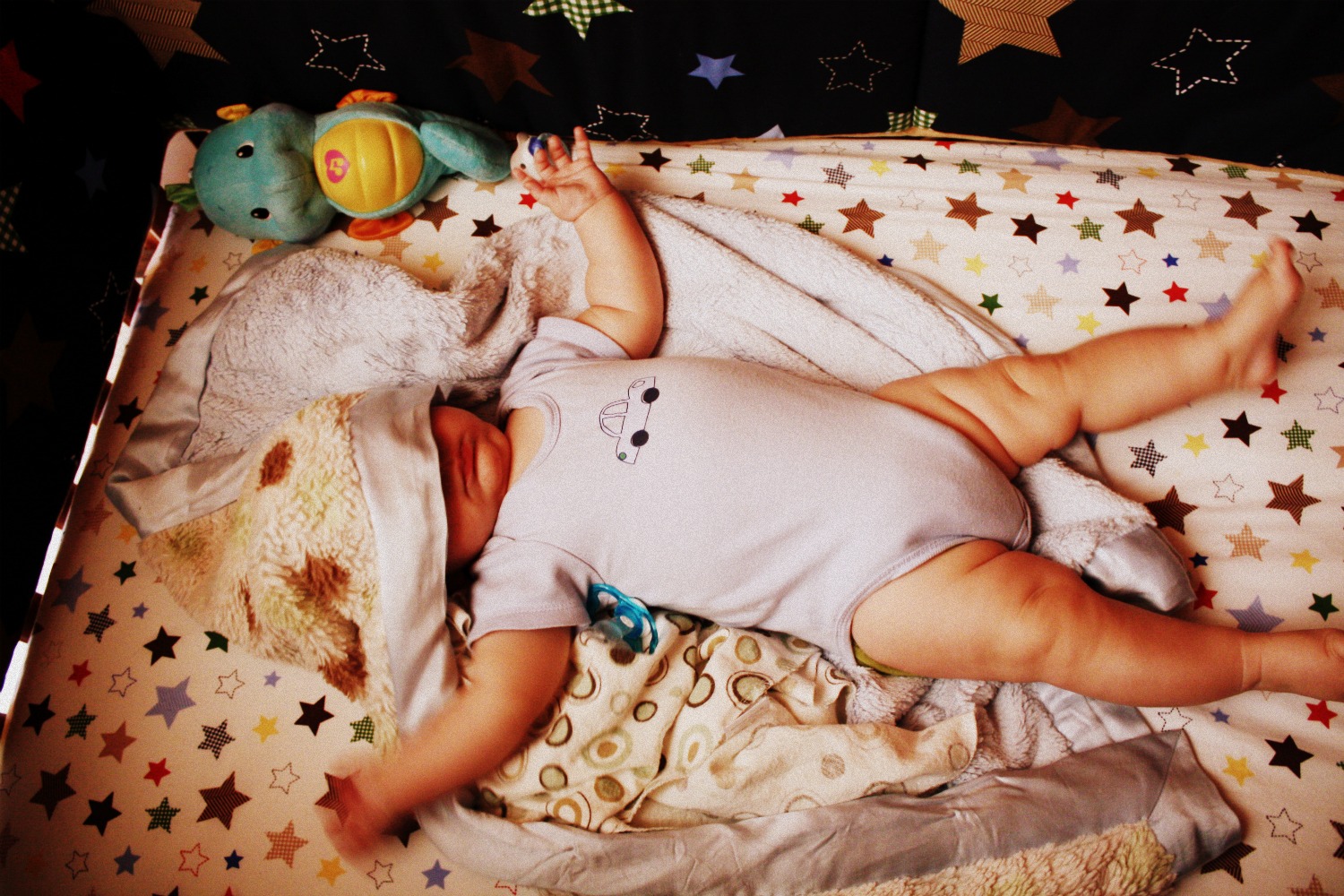 This is what you don't want to happen in the crib.

I. Some form of asphyxiation or carbon dioxide poisoning that is brought about by the sleeping circumstances created by the caretaker. The two major co-factors are sleeping on the stomach or being covered by the covers. Being crushed by a parent which constrains the normal breathing process has also been identified in cases where the baby sleeps with the parents.

II. Toxic chemicals outgassing from brand new bedding to include the crib, mattress, unwashed synthetic mattress covers, sheets, pillows, blankets, duvets, stuffed animals, etc. Also, a freshly painted room with brand new baby furniture and other new room furnishings which are outgassing, especially when there is insufficient ventilation in the bedroom, also contribute to the toxic air environment which can overwhelm a very delicate, sensitive and fragile newborn body.

In 1996 The British Medical Journal published a conclusive research paper under the following title:
Environment of infants during sleep and risk of the sudden infant death syndrome: results of 1993-5 case-control study for confidential inquiry into stillbirths and deaths in infancy

The results of this study irrefutably points to the common sense conclusions which many bereaved parents arrived at themselves. The baby simply died from asphyxiation because the covers (often a fluffy duvet) or blanket or sheet covered the head for a long enough period of time to cut off proper air flow.

The second most likely cause of SIDS, as indicated by the table of results below from the same BMJ paper, is sleeping on the stomach. Again, we see that the baby’s normal breathing can become seriously affected by this particular sleep position, especially if there is a fluffy mattress, thick duvet cover, or unnecessary pillows in a small crib. 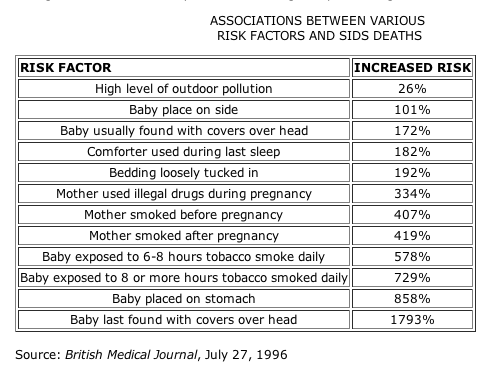 For those who doubt these explanations, we would ask that you simply apply some common sense to this matter. Especially when there is no other obvious cause of death and the autopsy reveals relevant data pointing to asphyxiation, these two risk factors remain as the most compelling. Therefore, new parents ought to pay close attention to the regular sleeping practices and environment to avoid an unnecessary loss of a baby and/or young child.

Here’s an excellent resource for those who want to explore this subject more deeply:
Keeping Baby Safe: SIDS Risk Reduction 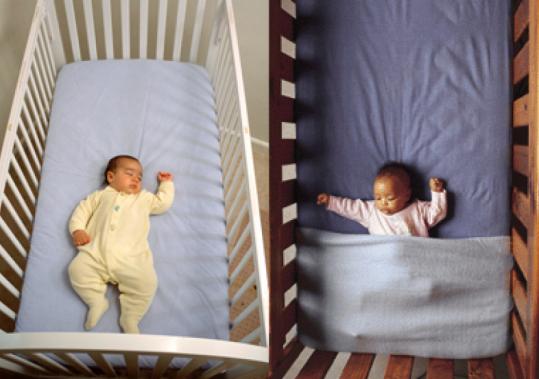 The infant should be placed in the crib as shown with the sheet and/or blanket tucked in well.

The following article portrays a state of affairs in the typical home (and bedroom), which has only gotten significantly worse since it was written in August of 1997. Clearly, the proliferation of chemicals from so many sources that are now found in a house (particularly a new house or recently finished bedroom) can contribute to an ambient air environment which can be quite taxing for a newborn.

Here we see that wherever indoor air pollution is present in the highest concentrations, there is a higher percentage of SIDS showing up. Of course, smokers in general, as well as those who live in areas with high amounts of air pollution, are usually living at a lower socioeconomic level which also correlates with lack of education and awareness regarding newborn baby best practices. Their lives are understandably much more stressed and therefore some of these subtleties are lost while dealing with the pressures of life.

Even though the air quality risk factors are statistically lower than those associated with outright asphyxiation, they can contribute to SIDS in quite serious ways and ought to be addressed, if for no other reason than the future health of the child.

CAVEAT and Best Recommendations:
• Newborn babies and infants should never sleep on their stomachs, as so much can go wrong in this position, as we have seen with so may cases of SIDS.

• Covers, blankets, sheets, pillows, stuffies (stuffed animals shouldn’t be in the crib during sleep time), should be managed and monitored in a such way that they cannot become a cause of death.

• All bedding, linens, blankets and covers ought to be made of natural fiber and thoroughly washed two or three times before being used in a crib or small bed. Washing first with a 1/2 cup of white distilled vinegar, followed by a 2nd wash with 1/4 cup of baking soda, followed by a third wash with only cold rinse water will ensure the removal of much chemical toxicity found in brand new fabric materials and is highly recommended.

The PubMed Health page also does give some very good and useful information regarding the prevention of SIDS as follows: 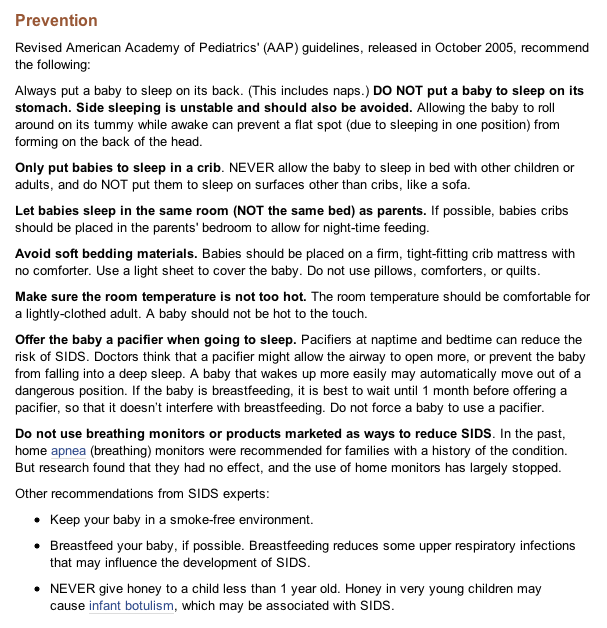 It should be noted here that sleeping in the prone position (on the stomach) is strictly “prohibited” within the healing school of Ayurveda. For a number of different reasons, Ayurveda recommends that one sleep in the supine position – on their back with face up – or on the right side if this cannot be maintained for whatever reasons.
Sleeping in the prone position is considered to be very unhealthy and unwise, and will cause numerous health problems the longer one sleeps in that manner.
Sleeping on the back is the best way to sleep. Very similar to the hatha yoga asana (posture) known as shavasana, this sleeping position will promote relaxation, deep sleep, and a strong back and neck.

How to evaluate the typical Media Health Alert:
The following article is a perfect example of where biomedical research ought to marry up with common sense.
When the blankets are covering a baby’s head at night, or the baby is sleeping on the stomach, or both are happening at the same time, carbon dioxide can build up in the system which is normally detected by a baby with normal amounts of serotonin. Furthermore:

The point is that we first look to get fresh oxygen into the baby’s sleeping room and then perhaps the serotonin levels will go back to normal. Artificially fixing the baby’s serotonin level with synthetic hormone treatment is a medical model approach that will surely cause more problems that it addresses, yes?
Alternatively, healthy food and good nutrition, plenty of stimulation, a happy home environment, lymphatic drainage massage, etc. will help to ensure that the endocrine system is functioning properly.

Permission is granted to post this health blog as long as it is linked back to the following url: http://thehealthcoach1.com/?p=2729