Are you at risk? How so, and what you can do?

As Global Climate Change manifests more and more in the form of regional warming on many parts of the globe, the northward migration of insect-bearing parasites and the spreading of disease becomes more common. Chagas Disease is one of those diseases from the South which is quickly gaining a foothold in North America. Known as American trypanosomiasis throughout South America it has long established itself as the disease of the poor and one which is very difficult and expensive to treat. 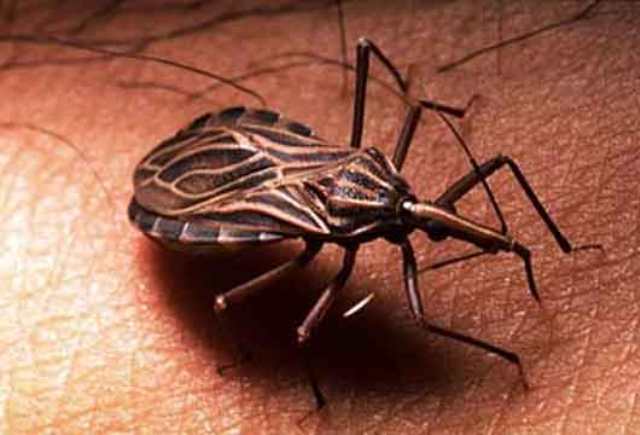 Take a good look at this reduvid bug (Rhodnius prolixus is the principal vector of Chagas transmission throughout Central and South America.)

This does not have to be the case, however. When a more holistic, natural and comprehensive approach is taken, this parasite-borne, reduvid bug-spread disease can be kept in check by a community. However, when an individual has had this parasitical infection beyond a certain threshold of time, it is critical to receive the best treatment medical science can provide. Here’s why according to PubMed:

About 30% of infected people who are not treated will develop chronic or symptomatic Chagas disease. It may take more than 20 years from the time of the original infection to develop heart or digestive problems.

Progression of the Chagas Infection and Disease Process
~ ~ ~ Click on the diagram to enlarge. ~ ~ ~ 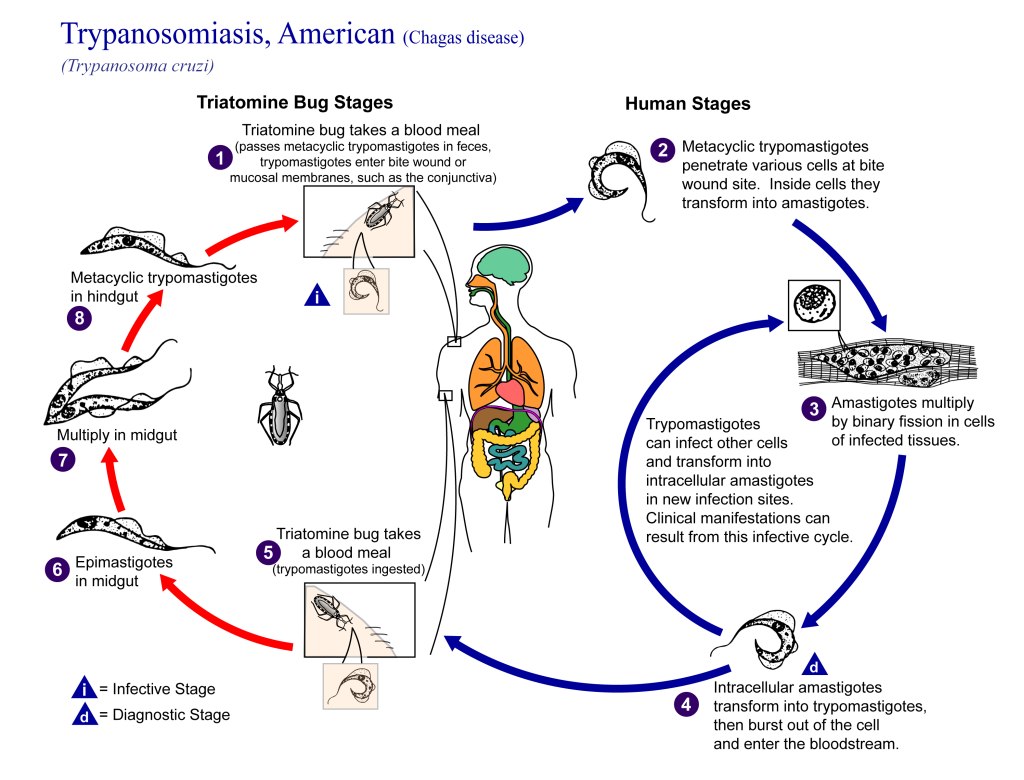 As the weather continues to change and become warmer, particularly throughout the Southern tier of the USA, the insect from South America that carries Chagas has become more commonplace. Those who are exposed due to socioeconomic circumstances will be at much greater risk. Therefore, we highly recommend a prompt response to any suspected bites carrying the offending parasite.

When the bio-terrain is sufficiently clean that it will not support unwanted pathogenic micro-organisms, the job of ridding the body of a recently infected parasite becomes much easier. The higher you raise the vibration of the body through a variety of healing protocols, detoxification therapies and immune-building techniques, the more naturally the immune system and healthy bio-terrain will ward off ‘bugs’ that don’t belong in the body.

It really is that simple. Except that it does take some time, energy, focus and basic health resources/tools to get this job done properly.

For instance, there are many different parasite cleanses of high quality available on the internet. They range from general parasite eradication programs to very specific parasite-specific protocols. The latter type can even be designed to address the Chagas parasite with great effectiveness and focus. The key here is to collaborate with a trusted health professional who has experience with parasites. Lots of subtlety and mimicking of other diseases going on here, so you want someone (naturopath, osteopath, herbalist, acupuncturist) who has been around the block a few times.

If you haven’t already, performing some other organ cleanses will only serve to put the odds in your favor to be liberated from a Chagas-type of parasite. They can hang around for a long time and develop into all manner of serious disease processes as previously listed. It is highly advised that a medical diagnosis be acquired, especially if the symptoms have been present for an extended period of time. Also, because of how Chagas can mimick other similar diseases. At the very least, the following ought to be carefully checked out to rule in or out the presence of this disease with certainty. As follows:

When headlines appear like the ones below, it’s clear that Chagas is a disease to be taken seriously and dealt with expeditiously, yes? No fooling around with this one!

Chagas disease – ‘the AIDS of the Americas’ 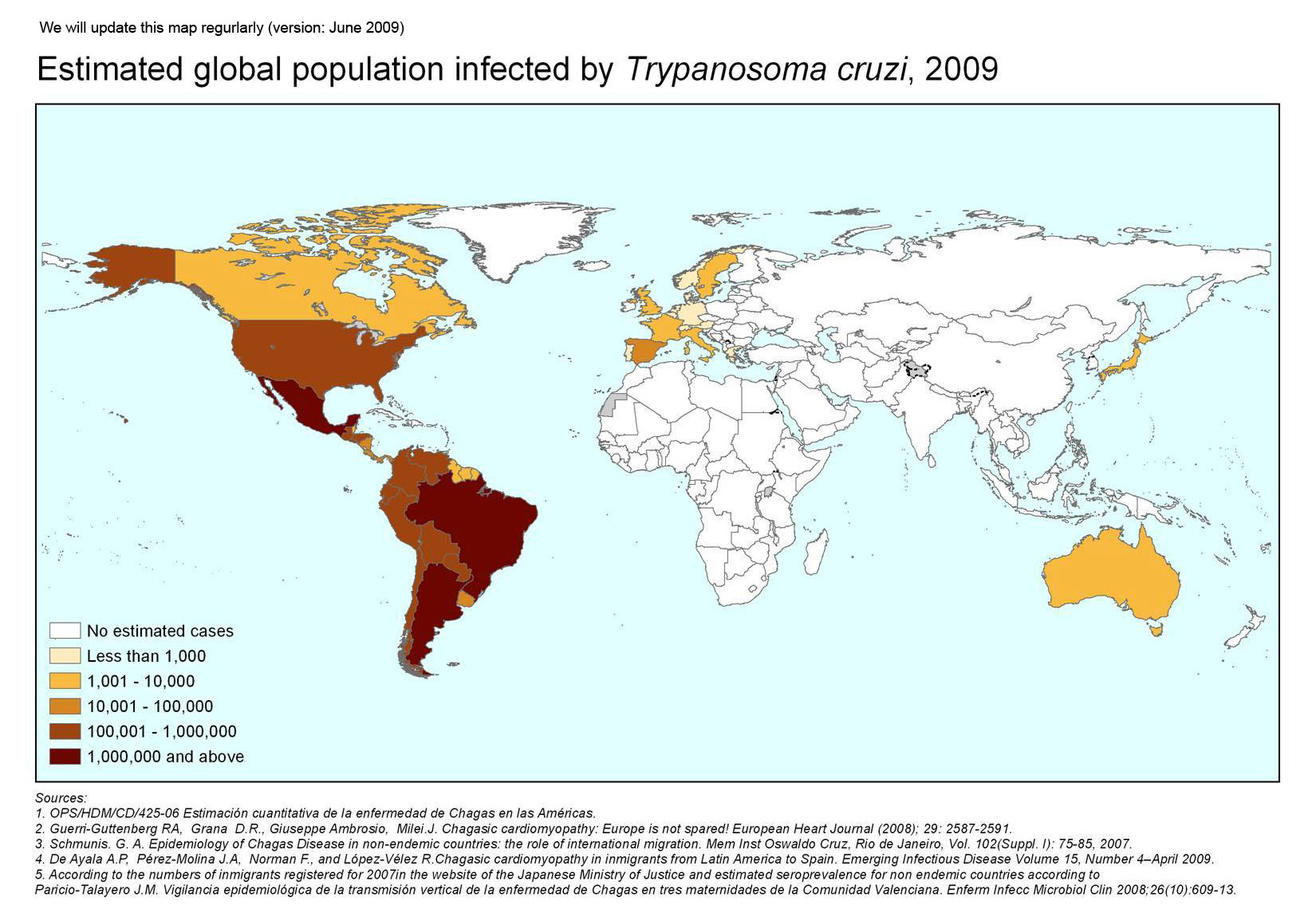 As the weather warms, the offending insect will bring Chagas further north.

As for this recent headline, we would answer a flat “NO!”. Chagas categorically does not have the same disease profile as AIDS or HIV. While there are some similarities, we would say that the transmission and symtomatology of Lyme Disease has a much closer resemblance. Not only is the primary vector of transmission a ‘bug’, there does appear a “swollen red area at site of insect bite.”

Both Chagas and Lyme also follow a similar pattern of both an acute and chronic phase. The symptoms for Chagas during each phase, according to PubMed, are as follows:

Chagas disease has two phases: acute and chronic. The acute phase may have no symptoms or very mild symptoms. Symptoms include:
– Fever
– General ill feeling (malaise)
– Swelling of one eye
– Swollen red area at site of insect bite

After the acute phase, the disease goes into remission. No other symptoms may appear for many years. When symptoms finally develop, they may include:
– Constipation
– Digestive problems
– Pain in the abdomen
– Swallowing difficulties

Now compare with the following description of the two phases of Lyme disease:

What is the point here? Just like Lyme, Chagas does have some very serious developing symptoms when left untreated. Especially for children who are frequently bitten by insects in warmer climes, it’s very easy to let these various bites go unattended because they are so common. When you don’t know the identity of the insect, it’s always better to err on the side of caution. Watch closely for any presenting symptoms which might develop in the wake of bite, particularly redness, swelling and fever. The fever is always a good thing, since it is the body’s way of exhibiting a healthy immune response. 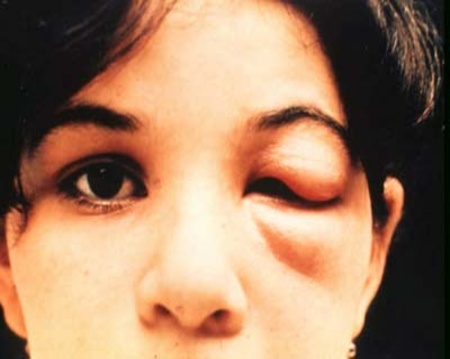 "Acute Chagas Disease in a young child. This is frequently seen in acute cases and is presumed to mark the point of entry of the parasite."
SOURCE: Journal of Young Investigators

What are the most likely ways of being infected with the parasite which causes Chagas?

The US Center for Disease Control has a nice page which addresses this question and more. As follows from the CDC website:

Some triatomine bugs, if infected, can transmit T. cruzi.
Chagas disease, or American trypanosomiasis, is caused by the parasite Trypanosoma cruzi. Infection is most commonly acquired through contact with the feces of an infected triatomine bug (or “kissing bug”), a blood-sucking insect that feeds on humans and animals.

How can I keep triatomine bugs away from my home?

Again, from the CDC site, here is a list of measures that can be taken to remove a conducive environment for the offending parasite-bearing insects known as triatomine bugs:

Other precautions to prevent house infestation include:
• Sealing cracks and gaps around windows, walls, roofs, and doors
• Removing wood, brush, and rock piles near your house
• Using screens on doors and windows and repairing any holes or tears
• If possible, making sure yard lights are not close to your house (lights can attract the bugs)
• Sealing holes and cracks leading to the attic, crawl spaces below the house, and to the outside
• Having pets sleep indoors, especially at night
• Keeping your house and any outdoor pet resting areas clean, in addition to periodically checking both areas for the presence of bugs

So, now you’re practically an expert on Chagas, a disease to be prevented not feared. There are many excellent reference sites on the internet which can be consulted if you suspect either an infection or infestation. Given that the southern swath of the lower forty-eight states is now appreciably warmer in temperature, especially with an emerging pattern of milder winters, this health threat does loom larger on the horizon. The cold winters of the past used to kill many seasonal insects coming up from the south, but that can no longer be relied upon. Therefore, we can take all the proper precautions listed above, as well as respond appropriately in the case of a full-blown Chagas infection.

“Once ounce of prevention is worth a pound of cure.”

Addendum:
US Distribution Map of Triatoma lecticularia, the bug which carries the parasite that cause Chagas disease (also called American trypanosomiasis). 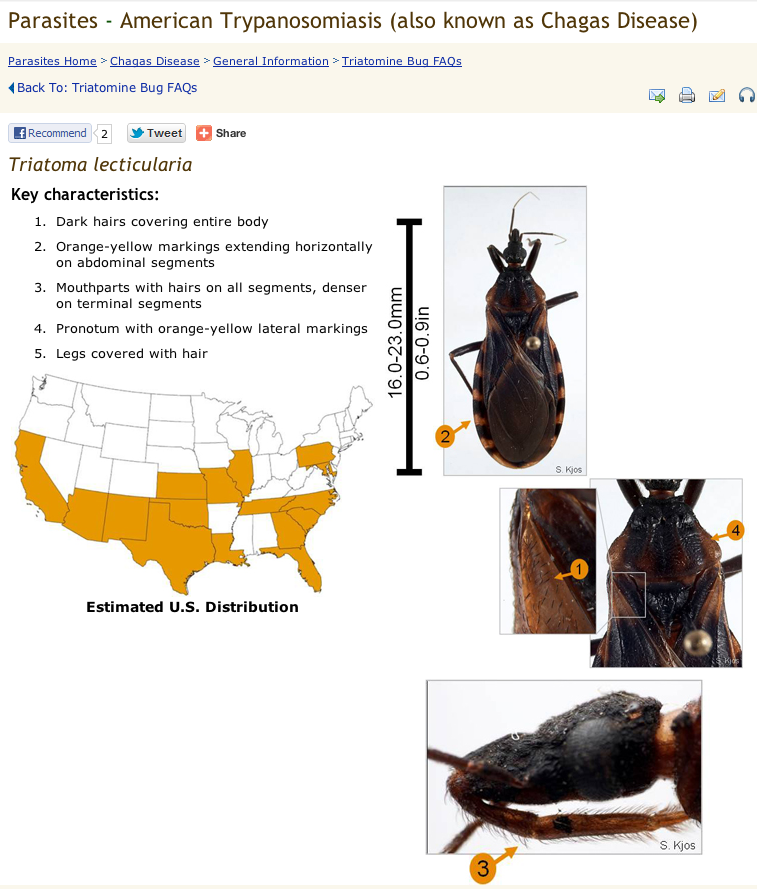 Permission is granted to post this health blog as long as it is linked back to the following url: http://thehealthcoach1.com/?p=2408