MONATOMIC GOLD: What is it and what can it do?

When making choices about our bodies and their care we need to know the real nature of the things we are putting in or on them. Hearsay and rumor filled with half-truths will not help us to make good and informed decisions. This is largely the case for “monatomic gold” as it has become a victim of New Age mentality and hype. The term, “Enlightenment in a bottle” puts the hype into a very telling and condensed example. “Snake oil cure all” is another recent, only pejorative soundbite, which is more apt. Let’s briefly look at what monatomic gold really is, its history, nature and uses, so that we can then base our health choices on accurate information.

Monatomic gold is known by many names such as ORMUS, ORMES, Manna, white powder gold, Philosopher’s Stone, Elixir of Life, potable gold and colloidal gold, just for starters. Its nature and virtues have been heralded throughout antiquity and up to the present time. The Egyptians made it with gold leaf ground into pure desert sand and then boiled it in concentrated acid (vinegar). The Ayurvedic practitioners call it Swarna Bhasma and produced it by amalgamation with mercury, followed by the addition of special herbs, culminating with the mercury boiled off in a retort (A container or furnace for carrying out a chemical process on a large or industrial scale.)

The Vedic culture used monatomic gold for many ailments, from arthritis to tuberculosis, from infertility to impotency. It also acts as a potent nerve tonic and detoxifier[1]. We also see the virtues of gold being promoted by various alchemists throughout history; one of the best known is Paracelsus as is his production of Aurum Potable. The Chinese called it “Kim” (Gold) and “Yeh” (Juice) becoming “Kimiya”. When the knowledge of this “Gold Juice” reached the Arabic culture they added the definitive article ‘al’ creating “Al-kimiya” or Alchemy. The goal of much of alchemical pursuit is the transmutation of gold into tonics; not lead into gold as mistakenly popularized*.

*The widely known phrase “transformation of lead into gold” is also a common metaphor in the very esoteric and arcane field of spiritual alchemy. It refers to the transformation of the human being into his/her divine Self by way of the rigorous spiritual practice that unfolds after kundalini awakening (aka shakitpat).

Potable gold (aka Aurum Potable) refers to the colloidal state of gold. When gold is below 100nm in particle size it becomes both bio-available and catalytic[2]. The smaller the cluster of atoms, the more available and catalytic gold becomes until of course we get to the single atom of gold or monatomic gold[3]. A single atom of gold is about 1.46Å; that’s the same Angstrom (or wavelength) used for light measurement, and is sub-nanometer.

The FDA assigns no values for gold in the diet, as it is by nature completely inert, not easily forming compounds. People with gold allergies are usually reacting to the other base metals added to gold jewelry such as nickel, copper, tin and even silver. The addition of these metals makes the gold easier to work with while at the same time increases durability. In each instance, we are talking about coarse metallic gold, not the bioactive colloidal forms. Unlike colloidal silver (argyria) the internal consumption of gold colloidal has no known side effects or toxicity[4]. Of course, we know that any substance – even water – can become toxic above certain thresholds of intake.

As an aside, there are several toxic forms of gold salts which are unfortunately used in medicine, “Aurothiolate organocomplexes are the only form of gold currently used in medical practice for the treatment of rheumatoid arthritis (RA), and they are associated with a high incidence of adverse reactions.”[5] These organocomplexes are a highly ionic form of gold and tend to cause kidney issues among other adverse health conditions.

So, we see that the form and size of the gold is what is most important. Being in an organic bioavailable form is also vital. True monatomic gold is not easily synthesized and appears to exist only in an aqueous form combined with silica. The liquid form is almost clear having a slight iridescent blue color due to refraction by the silica in solution. The silica is the same silica as the sand used by the ancient Egyptians. This same form also exists as a monatomic structure in orthosilisic acid among other forms of silica*.

*Silica can also exist in complex with the gold as the ‘nucleus’ of a synthetic zeolite molecule; zeolites are known for their effective cleansing and anti-cancer effects[6]. However, a little known yet serious issue with zeolites is that the ‘nucleus’ that is surrounded by silica is aluminum. Many of us are quite familiar with the issues concerning the over-consumption of aluminum.

Lastly, when we combine this unique form of gold with the “Solvent of Life” – water – there is evidence that suggests that the water changes its polar bond angle of the two hydrogen atoms. This resulting restructuring of water is quite significant and also serves as the basis of Homeopathy[7]. Some believe that this profound alteration can even affect the intercellular matrix by energizing and resetting the “morphogenetic field” – a concept proposed by the early scientific pioneers of embryological development. 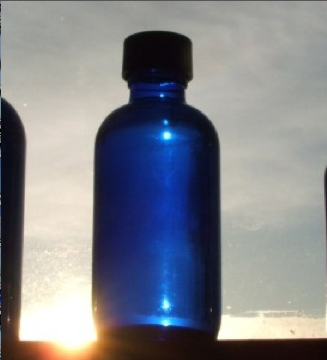 Monatomic Gold in a bottle

Monatomic gold is clearly an extraordinary healing agent as glimpsed by its historical usage by ancient civilizations, powerful curative properties in alchemy and other unique healing qualities advanced by Ayurveda and Traditional Chinese Medicine. It does have many uses above and beyond those very few mentioned here. As we unpack the many subtleties and nuances associated with this delicate elixir, you will surely come to respect the genuine form of this sacred water for its great value.

We have given you a lot to chew on here. In fact this session has been much more chemistry class than holistic health coaching. Monatomic Gold – Part II will take up the more significant health coaching issues which have emerged as monatomic gold is loudly trumpeted by health marketeers. Understanding what’s really out there in the marketplace will help you avoid detrimental health decisions and save you LOTS of money.

With every good wish,
The Health Coach

Author’s Note:
Part I and II of our “Gold” articles were submitted by one of our gold
experts whose research and knowledge are of the highest order.
Part II will contain much anecdotal evidence and personal testimony from
the same expert regarding the observed efficacy of genuine monatomic
gold. The referenced ‘quasi clinical trials’ were easy to conduct because
of how quickly and definitively the skin responds to the topical application
of monatomic gold.
You can try it and see for yourself.
But, as always, you must know the purity of your source of monatomic gold.

[2] The Early History of Catalysis by Gold (Geoffrey Bond)

Permission is granted to post this health blog as long as it is linked back to the following url: http://thehealthcoach1.com/?p=577